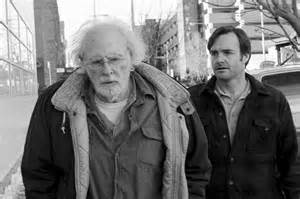 After a string of charmingly insightful films such as About Schmidt, Sideways, and The Descendants, Alexander Payne has joined that group of filmmakers whose every effort is met with winning expectations.

His latest is Nebraska, and it exceeds them all.

The film follows the trail of Woody Grant (Bruce Dern), an aging booze hound in Montana who gets a contest solicitation in the mail. Convinced he’s already won the million-dollar sweepstakes, Woody is determined to make the required trip, on foot if necessary, to the contest office in Omaha where his prize awaits.

To appease his stubborn father, Woody’s son David (SNL vet Will Forte) steps in, and the estranged pair hit the highway for Nebraska. Along the way, they stop off in the small town where Woody grew up, reconnecting with old friends and family who have differing reactions to Woody’s new “millionaire” status.

As is his custom, Payne is able to convey much with graceful direction and an intelligent, restrained script. Artfully filming in black and white, Payne often lets wide shots linger, utilizing exquisite cinematography from Phedon Papamichael to create scenes brimming with a stark beauty. Similarly, the faces and facades of Woody’s hometown reveal the dark corners shared by any of a thousand communities weakened by hard times.

Dern is smart enough to realize what he has with Woody, and he doesn’t waste the role of a lifetime. With an awkward gait and world-weary countenance, Dern digs into the dimensions of his character, delivering a deeply touching performance sure to get attention in the coming award season.

Though casting MacGruber opposite the legendary Dern does seem surprising, Forte shows some nice dramatic chops, allowing us to relate with David as he slowly begins to see his father in a new light.

Scene- stealing honors go to June Squibb, who’s a flat-out riot as Woody’s cantankerous wife Kate, and the venerable Stacy Keach as a long lost friend who may not be so friendly after all. Keep an eye out, too, for Angela McEwan. In limited screen time as Woody’s old girlfriend, she breaks your heart in the best possible way.

In many ways, Nebraska seems to be Payne’s most personal film, which is ironic considering it is the rare directorial effort that Payne didn’t also write. Bob Nelson gets that credit, and his debut screenplay is layered with poignancy and humor. It clearly spoke to Payne, and his vision for fleshing it out is impeccable.

Nebraska is infused with a subtle longing, a wistfulness for what you’ve left behind. That may sound like a recipe for rampant sentimentality, but Payne and Nelson have other plans. There’s also a rambunctious, often downright nutty spirit at work here, and it makes sure Nebraska leaves you smiling, even as it hits you squarely in the heart.

One thought on “He May Already be a Winner”