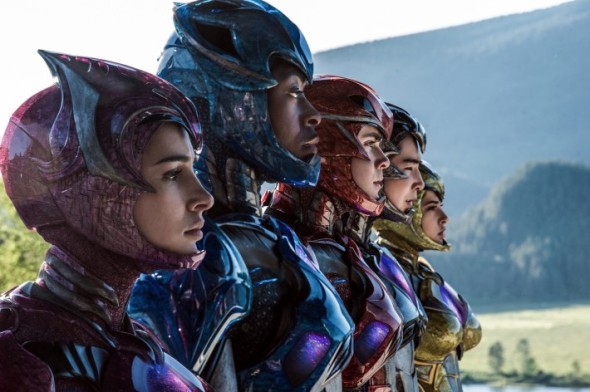 Let us put an end to our petty squabbling and share a delicious warm donut, for Power Rangers is here to confirm what we long imagined. The key to saving the world lies in defending your local Krispy Kreme.

It’s true, and as long as this reboot taps into that Saturday morning vibe and Elizabeth Banks yells gems like “Push them into the pit!”, there’s some over the top fun to be had. Getting there, though, is damn near insufferable.

For an origin story, we get stitched-together remnants of better movies (Breakfast Club, Spiderman, 127 Hours, Breakfast Club again) and warmed over teen angst. The five young heroes are diverse in personality, ethnicity and lifestyle, and John Gatins’s script wields these cliches like a pandering Hulk smash.

It’s just a shame our new Rangers can’t morph until they “really get to know each other.”

What if…we cue the strings and take turns telling each how nobody “gets me” and how awful it is to be a great looking teenager! Then we can be mighty! Yep, mighty lame.

Just when you’re wondering why Bill Hader’s voice and Bryan Cranston’s face are in this mess, here comes Banks as Rita Repulsa (nice!), a gold-eating, scenery-chewing villain from space! Once Rita starts destroying the Earth, Banks starts saving the film, and director Dean Israelite (Project Almanac) finds the throwback groove we’ve been waiting on for over an hour.

← Shout at the Devil
Choose Nostalgia →
Scroll Up