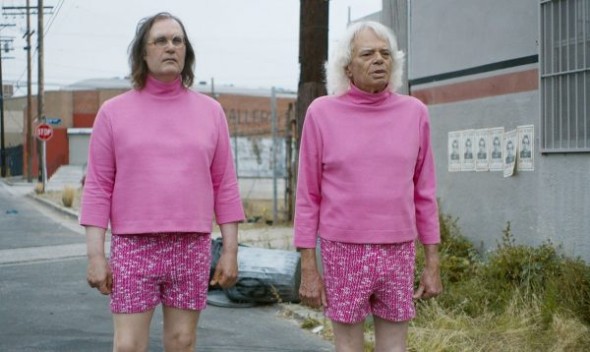 A touching father/son story about romance, car washes and disco, this movie is like little else ever set to film.

Director Jim Hosking and co-writer Toby Harvard are responsible for the ABCs of Death 2 short G is for Grandad. What this longer-form horror shares with their highly entertaining and unseemly short is an interest unholy familial unions, men in their underwear, and merkins. (Look it up.)

Brayden (Sky Elobar) and his dad Big Ronnie (Michael St. Michaels – that is a name!) share the family business: LA walking tours of disco landmarks. They live together, work together, eat together. Why? Because Brayden’s had it with mom’s new beau Ricky Prickles, and if Ronnie evicts him, where else could the middle-aged Brayden go?

Father and son possess a seriously unusual family dynamic that seems to work for them until they meet Janet (Elizabeth De Razzo – brave and funny).

Both men fall for this “rootie tootie disco cutie,” and if that wasn’t enough, there’s a marauder on the loose – an inhuman beast covered head to toe in cooking grease.

The Greasy Strangler feels almost akin to Napoleon Dynamite, had the latter involved a lot of full frontal nudity and queasying sexuality. The brilliantly awkward comedy leaves you scratching your head. Every absurd character begs for more screen time, and yet, each gag (and you will gag) goes on for an almost unendurable length of time.