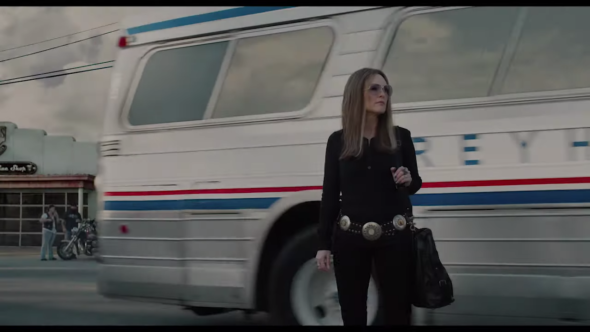 “The path up is always a jagged line.”

Gloria Steinem always could articulate the struggle toward progress. Filmmaker Julie Taymor certainly understands that sometimes the best way forward is not straight ahead. The daring filmmaker (Across the Universe, Frida, Titus) puts four Glorias on a bus heading nowhere and everywhere to help us see Gloria Steinem, backward and forward.

The Steinem we best recognize—trailblazing feminist and human rights advocate of the 60s, 70s and onward—is played by the always excellent Julianne Moore. Wise and just a little weary, Moore’s version brings Steinem’s warm soul to the screen.

She’s joined in the role by Alicia Vikander, who plays Steinem in her 20s and 30s; Lulu Wilson as teenaged Gloria; and Ryan Kiera Armstrong, portraying Steinem as a child. Though Vikander stumbles with the flat Ohio accent, each performance establishes something that grows from one era to the next: resolve, openness, vulnerability, courage.

Taymor’s characteristic flourishes sometimes work well to enrich a tale fit for a legend. At other times, they seem like filler in a film that’s far broader than it is deep.

It is exhilarating to watch these pioneering advocates spar and support, dodge and demand, and most of all, speak up. It’s heartbreaking, too. There’s exhausting tragedy in all that promise left unfulfilled, and real terror in the face of what we now stand to actually lose.

But a cameo from the legend herself may be enough to reaffirm anyone’s resolve. As she says, “The constitution does not begin with ‘I the President.’ It begins with ‘We the people.’”