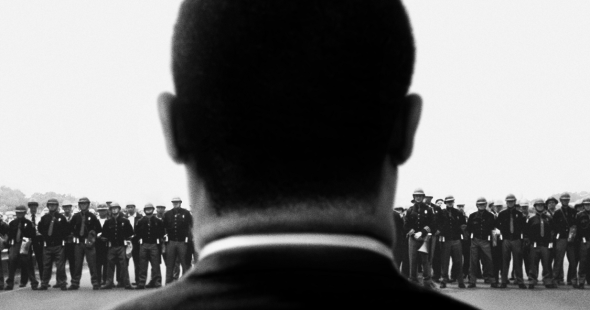 Every year Oscar season sees a healthy number of well made biopics for the Academy’s consideration, and those efforts are very often rewarded: 12 Years a Slave, Lincoln, The Iron Lady. But in the 14 years I’ve been covering film in Columbus, none has been as painfully relevant as Selma.

Ava DuVernay’s account of the civil rights marches in Selma, Alabama doesn’t flinch. You can expect the kind of respectful approach and lovely, muted frames common in historical biopics, but don’t let that lull you. This is not the run of the mill, laudable and forgettable historical art piece, and you’ll know that as you watch little girls descend a staircase within the first few minutes. Selma is a straightforward, well crafted punch to the gut.

Working from a screenplay by first time scripter Paul Webb, DuVernay unveils the strategies, political factions, internal frictions and personal sacrifices at play in the days leading to the final march from Selma to Montgomery, Alabama. Yes, she simplifies some complicated issues and relationships, but she is a powerful storyteller at the top of her craft and her choices are always for the good of the film.

The reliable David Oyelowo exceeds expectations as Dr. King. His passionate reserves at the pulpit and the microphone are goosebump perfection, but it’s in the quiet moments that he most impresses, having a bone-deep feel for the man’s weariness as well as his humor, his failings and his faith. It’s a beautiful performance and the heart of a powerful film.

At all times, DuVernay’s film certainly maintains an appropriate reverence for the material. Her cast is more than up to the challenge, beginning with the powerhouse turn from Oyelowo and extending through an impressive, sizeable ensemble. But it’s the filmmaker’s strength in storytelling that elevates this film above others, because DuVernay is never heavy handed, never preachy, and yet every scene is weighted with its historical significance as well as the disheartening immediacy of these events.

The closer black Americans came to the same simple freedoms others took for granted, the more dangerous their lives became, the more anger they faced in the streets, the more outrage was heard from the system that didn’t want – not just yet – to recognize their rights. That shameful time in American history was 1965 – a full fifty years ago. How awful that those wounds feel so fresh.