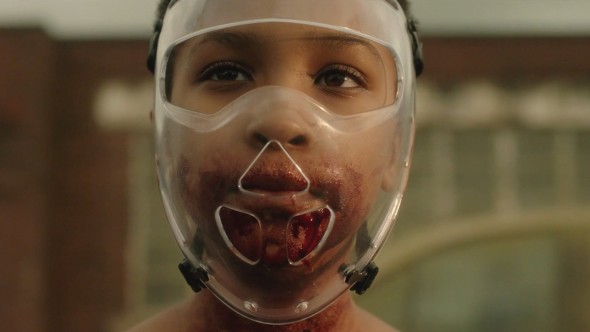 The Girl with All the Gifts

In 2010, director Colm McCarthy took an unusually restrained and intimate look at lycanthropy in his underseen Outcast – kind of a werewolf Romeo and Juliet among Irish travelers. This time he mines Mike Carey’s screen adaptation of his own novel with the same quietly insightful bent.

Melanie (startlingly strong newcomer Sennia Nanua) lives out her young life in a cell, then restrained head, hands and feet in a wheelchair as part of ongoing research conducted by Dr. Caldwell (Glenn Close).

Let’s pause. When 6-time Oscar nominee and all around acting badass Glenn Close deems a zombie film worthy of her talent, we should all pay attention.

So, what’s the deal? A horde of “hungries,” each infected with a plant-based virus, has long since overrun the human population. Dr. Caldwell, her researchers and the military are holed up while trying to derive a cure from the next generation, like Melanie – the offspring of those infected during pregnancy.

It is an unsettling premise handled with restraint and realism, bolstered by uniformly admirable performances.

Melanie aside, the characters could be standard fare zombipocalypse cogs: gung ho military guys, driven researcher, tender-hearted woman here to remind us all of the civilization we’re fighting to save.

But expect something surprising and wonderful out of every actor involved – from Paddy Considine as the Sarge with something to learn to Gemma Arterton as Melanie’s beloved teacher to Close, steely and cagey in a underwritten role.

But much of the weight sits on Nanua’s narrow shoulders, and she owns this film. The role requires a level of emotional nimbleness, naiveté edged with survival instinct, and command. She has that and more.

McCarthy showcases his bounty of talent in a film that knows its roots but embraces the natural evolution of the genre. It’s not easy to make a zombie film that says something different.

Girl brims with ideas and nods to films of the past – in many ways, it is the natural extension of the ideas Romero first brought to the screen when he invented the genre in ’68. It definitely picks up where his Day of the Dead left off in ’85, working in nods to 28 Days Later as well as other seminal flicks in the genre.