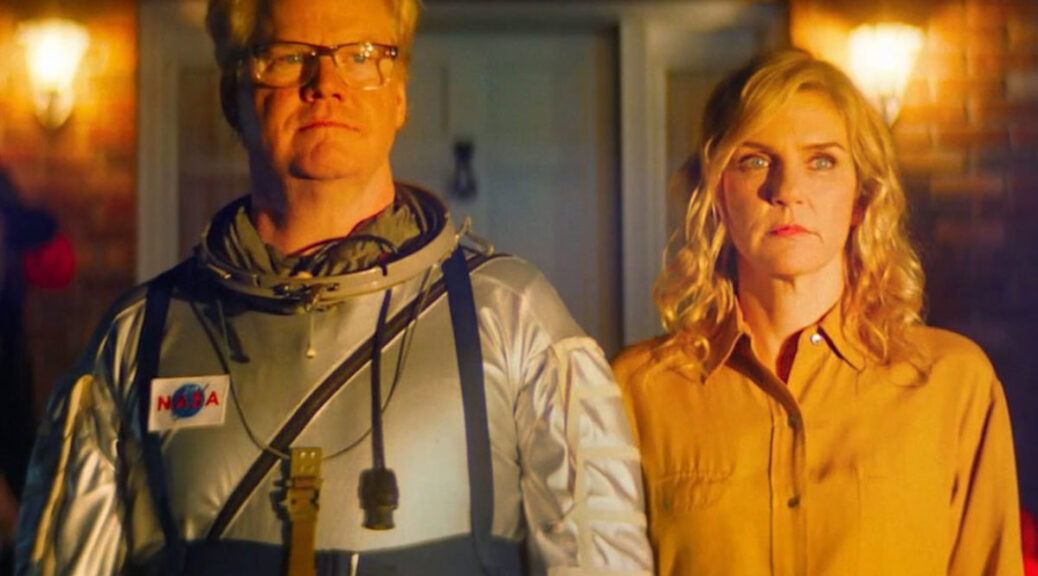 If you haven’t gotten to know filmmaker Colin West, it’s high time you correct that. The writer/director follows up last year’s surreal Christmas haunting Double Walker with a beautiful look at living a fantastic life.

The effortlessly affable Jim Gaffigan plays Cameron, an astronomer in suburban Dayton, Ohio hitting a very rocky path in his middle age. The kiddie show about science that he hosts is failing. Maybe his marriage is, too. New neighbors, a mysterious woman, and increasingly bizarre events have got him wondering. What does it all mean?

West, expanding his award-winning 2018 short Here & Beyond, writes a meticulous script that folds in on itself in fascinating ways, keeping you guessing and engaged.

Gaffigan is a far more nuanced actor than you might realize. While his dual roles appear at first to provide comedic opportunities, both Gaffigan and West have more up their sleeves than that.

Gaffigan’s performances and West’s approach are primarily earnest, and it’s that simple grounding that allows the absurd flourishes in the film to take flight without cynicism or irony. The supporting cast, including a wonderful Katelyn Nacon, and Rhea Seehorn, Amy Hargreaves, Tony Shalhoub and Gabriel Rush, surrounds Gaffigan’s turn with sincere, often tender but simultaneously comical performances.

West and cinematographer Ed Wu give the environment a nostalgic, lovely, tactile quality that allows it to feel lost in time. All of these elements — the performances, nostalgia, absurd moments and kitchy aesthetic — blend with the story being told in ways that become clear and powerful by Act 3.

Linoleum’s conclusion is a savvy surprise, one that capitalizes on the investment the audience is sure to make in Cam, his family and his happiness. Thanks not only to those performances but to West’s masterful storytelling, a movie that feels like a light-hearted jaunt becomes an emotional powerhouse that leaves you reeling.