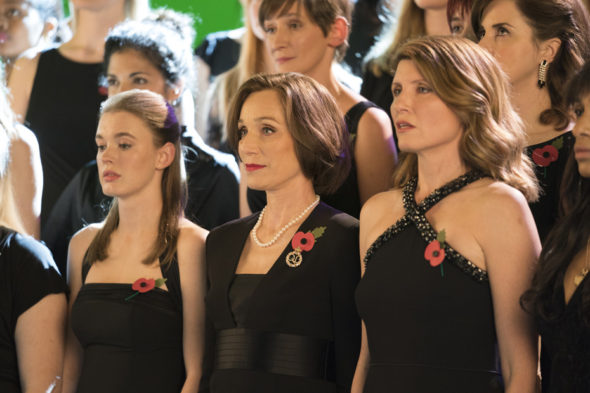 When the men and women living on a military base in England ship off on their latest tour, the wives left at home need to find a way to pass the time until the tour of duty is completed.

Enter Kate (Kristin Scott Thomas). Struggling with her own recent tragedy, Kate decides to take on a bigger role in the choir activities that are primarily organized by Lisa (Sharon Horgan).

As a colonel’s wife, Kate’s participation is unusual, but it’s not important for us to understand these intricacies of life on the base. What writers Rachel Tunnard and Roselyn Flynn are interested in is the conflict between uptight Kate and laid-back Lisa.

The movie proceeds as you would expect. Though inspired by real events, director Peter Cattaneo doesn’t inject any originality into the formulaic script. I couldn’t help but think of A League of Their Own while watching the events of Military Wives unfold. It’s almost a beat for beat remake with choir substituted for baseball. However, where A League of Their Own managed to subvert expectations and round out its cast, Military Wives can’t compete.

It’s hard to keep track of everyone in the sizable cast. Not every character is given depth, most are one-dimensional. The story, however, isn’t concerned with fleshing out these women—they serve to add depth to the conflicts faced by the main characters and to enhance the setting. We see these women preparing to send their spouses off to war, little moments of goodbyes, of children and mothers trying to connect to their loved ones overseas, of women trying to pass the time until they’re reunited.

Still, it seems Kristen Scott Thomas will always be remarkable no matter how little she’s given to work with. The few emotional moments the film manages to mine are delivered through Thomas’s strong performance. Horgan doesn’t quite match up to Thomas, but Lisa is also the less interesting character.

Formulas are often reused because they work, and if you’re looking for a feel-good film you won’t go wrong here. However, this is the kind of forgettable film that will fly under most people’s radar.