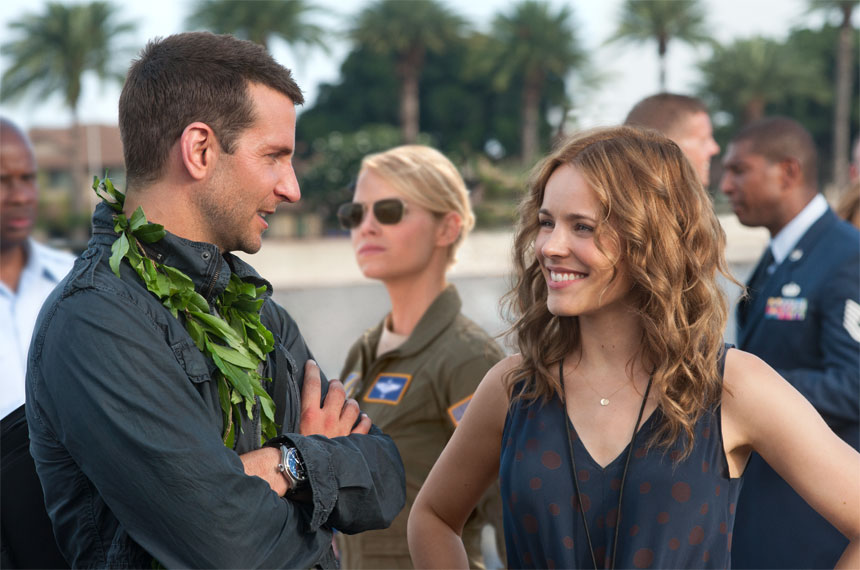 Aloha slips quietly into theaters this weekend. How is it that a Cameron Crowe film starring Bradley Cooper, Emma Stone, Rachel McAdams, and Bill Murray could fly under the radar with no critic screenings and barely a blip of an ad campaign?

No, on that cast alone this movie should have worldwide buzz. It should be the movie grown-ups see this weekend instead of San Andreas. Instead it’s an unwieldy, herky-jerky romantic comedy that leaves the romance and comedy behind in favor of goofy mush.

And what a waste of a cast! Hell, the sheer talent wattage nearly salvages the effort. Cooper is reliably compelling as military contractor Brian Gilcrest, a piece of seriously damaged goods with a chance to get back in with the big boys on this trip to Hawaii. McAdams shines as his former flame, and Murray is great as the charming, eccentric, billionaire villain.

Stone, however, drew the short straw with a wholly unrealistic character who’s equal parts Navy hutzpah and dreamy eyed innocent. Her hyperactive Captain Allison Ng, the Naval airman assigned to keep tabs on Gilcrest while he’s in town, rarely breaks beyond caricature and when she does it feels all the more inauthentic because of the broadly drawn comical foil we first meet.

Crowe’s writing is as likeable as ever, leaving cynicism behind and populating his islands with odd but lovable characters. He’s just not making any choices. Is this a romance? Because there’s a love triangle happening here that actually keeps your attention, under-developed as it is. Or is that cast aside in favor of one man’s dramatic attempt at redemption? Because that doesn’t work, either, as Crowe introduces a dark, political storyline that he tidies up with almost laughable convenience.

Crowe’s best work ranks among the better films you’ll ever see, but his last worthwhile film was 2000’s Almost Famous. Since then, his unchecked sense of wonder in the face of a cynical society has overtaken every film, none more so than Aloha.

Although, let’s be honest, it’s better than San Andreas.