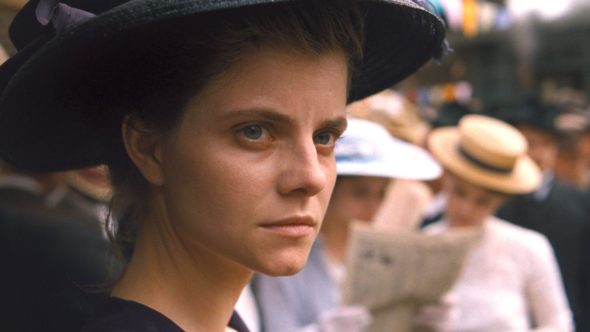 When Írisz Leiter (an intense and captivating Juli Jakab) returns to Budapest after a long absence, she seeks employment as a milliner in a hat store bearing her name. We learn quickly the store was her parents’, who died when she was two. The current owner, Oszkár Brill, refuses to give her a job and is evasive as to his reasons why. He tells her she can stay in town the night but then must leave.

From there, the tension quickly builds. Family secrets are revealed, and determined to learn more, Írisz refuses to depart as commanded.

With a combination of fearlessness and stupidity, Írisz throws herself into more and more dangerous situations seeking answers to questions we’re never quite sure of. Everyone Írisz meets evades her inquiries. She’s met with increasing resistance and resentment as she digs into her family’s history. As she follows sketchy leads, we’re taken deeper and deeper into the tumultuous world of Budapest in 1913.

There is much happening in director László Nemes historical drama, an ambitious follow up to his Oscar-winning debut, Son of Saul. There is a great deal to absorb as we follow Írisz. She’s our eyes in this world, and much of the time, she’s as off balance as the audience. Keeping the focus tightly bound to one character isn’t a bad way to orient an audience, but it can be problematic when we’re given too much information. It forces you to keep up, but not everyone will be up to the challenge of unraveling the mystery while puzzling over the surrounding details.

Visually, the audience is treated to a stunning film. The cinematography keeps us close to Írisz. Chaotic scenes lose focus, genuine terror is fed through her character’s reactions and facial expressions, crowded streets become oppressive. Darkness envelops much of the most horrific action, and it feeds the growing unease as Írisz’s journey follows unpredictable paths.

We’re never quite sure where the film will take us, but it’s a compelling journey. We’re kept on our toes, answers aren’t easily found, and it’s not always clear what we’re learning as each new answer appears. When we think we’ve unraveled the mystery, new information comes to unmoor us.