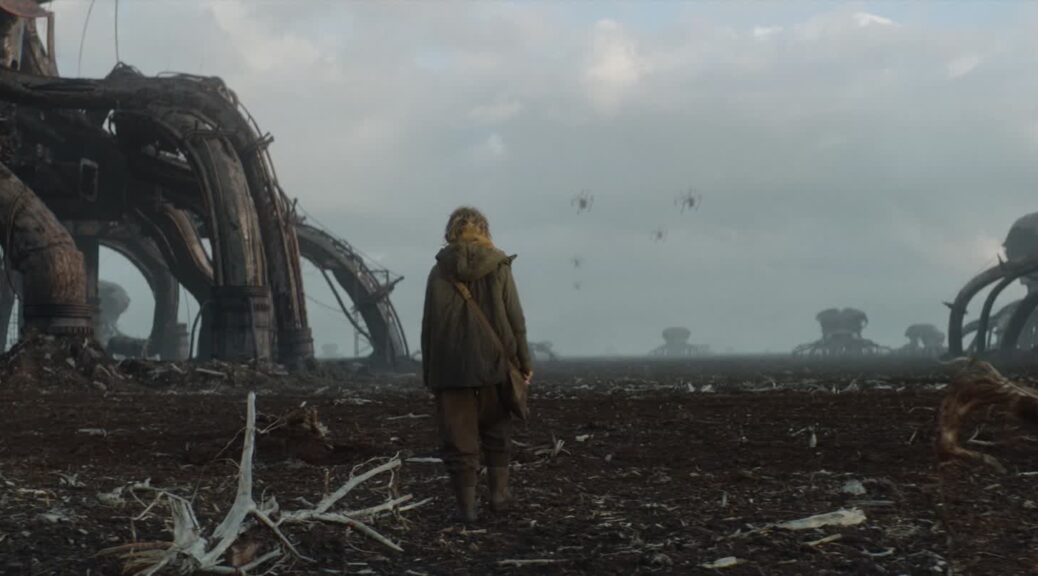 Imagine a world in which most of the plant and animal life has been obliterated, and what’s left is deadly and inedible. In this world, Kristina Buozyte and Bruno Samper have crafted Vesper. The filmmakers share writing credits with Brian Clark, and together, they plunge us into an unforgiving dystopia.

Vesper (Raffiella Chapman) is an adolescent girl who primarily fends for herself while also caring for her invalid father (Richard Brake). Her father, however, has placed his consciousness inside a volleyball-shaped drone. The drone’s sloppily painted face and dialogue ensure that Vesper never truly seems alone. She doesn’t always get along with her drone father, but as the story unfolds, we get a sense of their strong connection.

Saying too much more would take away from the discovery that comes as each moment unfolds on screen. A lot of this world is left to the imagination and flashes hint at sinister elements in every nook and cranny. Though Vesper and her father live alone, there are others who inhabit this world, and their motives and actions vary from deadly to seemingly benign.

The world-building in the film is mostly solid, just a few things requiring a strong suspension of disbelief. Allow yourself to be sucked in and the minor inconsistencies are easily overlooked. The science fiction elements bend closer to fiction than science, but it will only annoy the very skeptical.

This is because it’s hard to see past the powerful performances, particularly from Chapman. Though she shares the screen with numerous dynamic actors – and her very pessimistic drone – she commands every scene she’s in, which is nearly every one. She’s capable of carrying the film on her shoulders, and the movie is better for it.

Though sometimes reminiscent of films like Annihilation, Vesper manages to offer up a new vision of the future – one that’s terrifying, bleak, but sometimes hopeful. It’s a strong film with solid performances and a uniquely prescient take on our current reality.