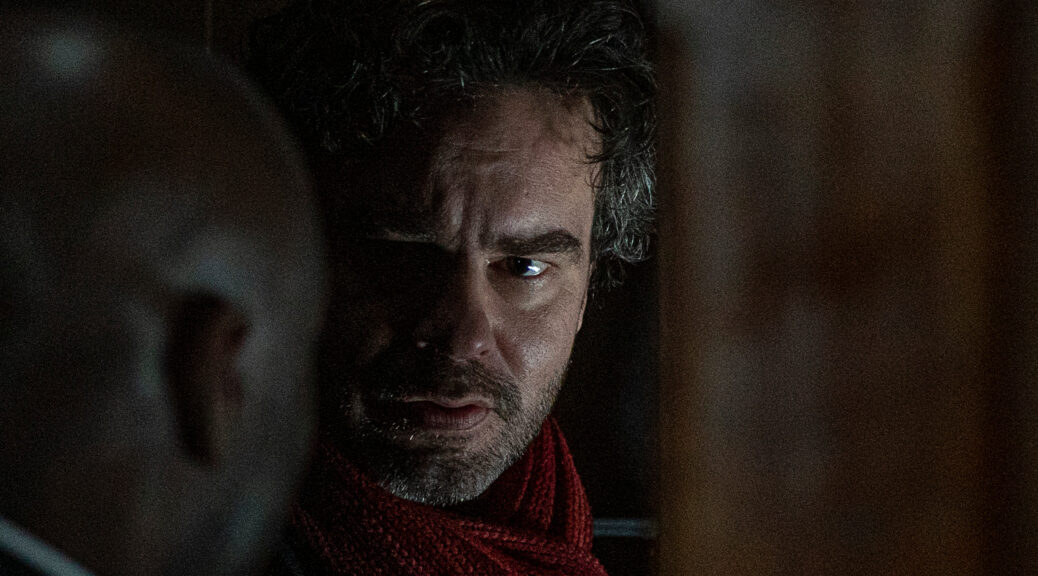 We all wonder why we are the way we are. As teens we blame our parents. In early adulthood we blame society. Then as we reach middle-age we blame our parents again. It’s a vicious cycle that most of us never grow out of nor get a satisfactory answer to. In Nr. 10, filmmaker Alex van Warmerdam (Borgman) suggests the ultimate nature vs. nurture question set against the absurdity of local theater. What’s the question you might ask? Well, that would be giving away far too much.

Gunter (Tom Dewispelaere) is a member of a local Dutch acting troupe. On the surface, Gunter has what looks to be a good life. He’s a respected member of the troupe, he has a close –  albeit complicated – relationship with his daughter, and he’s in a passionate relationship with a woman who just so happens to be the theater director’s wife. Things quickly begin to change for Gunter when a stranger approaches him and whispers a single word into his ear.

Nr. 10 is a difficult movie to discuss because getting too far into the weeds would potentially ruin any and all surprises the movie has. The surprises within the movie don’t necessarily make or break it, but they do constitute such a seismic shift that spoiling them might make future viewers feel cheated.

I do feel comfortable saying that Nr. 10 comes across as almost two separate movies. The first half is a deeply funny portrait of local theater and its idiosyncratic nature. The shallowness and vanity of actors are on full display as Gunter and a colleague squabble over the meaning of their characters and whether they would stick up for themselves when challenged. The antics of the theater and its culture never become the full focus – just a jumping-off point for Gunter and the other fabulous set of characters.

As the focus on the theater begins to wear off, the strangeness of what’s going on around Gunter begins to take hold. Well-dressed older men watch Gunter’s home and his day-to-day activities and report back to several high-ranking Catholic clergymen. Part of me didn’t want the eventual explanation of what was happening. The peculiarity of these scenes was just askew enough of reality to feel right at home in a David Lynch movie.

The eventual narrative shift toward the end of the film is a bit awkwardly handled but still leads to a satisfying back-half. The absurdity of the stage and its inhabitants is traded for an almost equally mind-boggling reveal of Gunter’s early life. The inclusion of a completely different genre shouldn’t work, but Warmerdam’s commitment to keeping the tone in check allows the film to barrel forward and not lose the audience in its wake.

Dewispelaere does a terrific job anchoring the film with his central performance. As Gunter’s early confidence withers away, Dewispelaere dances back and forth between helplessness and bewilderment at what is unfolding before him. It’s a performance that could’ve gone too big, and Dewispelaere wisely keeps things subdued even as the story gets wilder and more unbelievable.

Nr. 10 stumbles in trying to fasten together two separate narratives, yet the emphasis on dark comedy and character keeps the premise feeling fresh and fun the entire time.