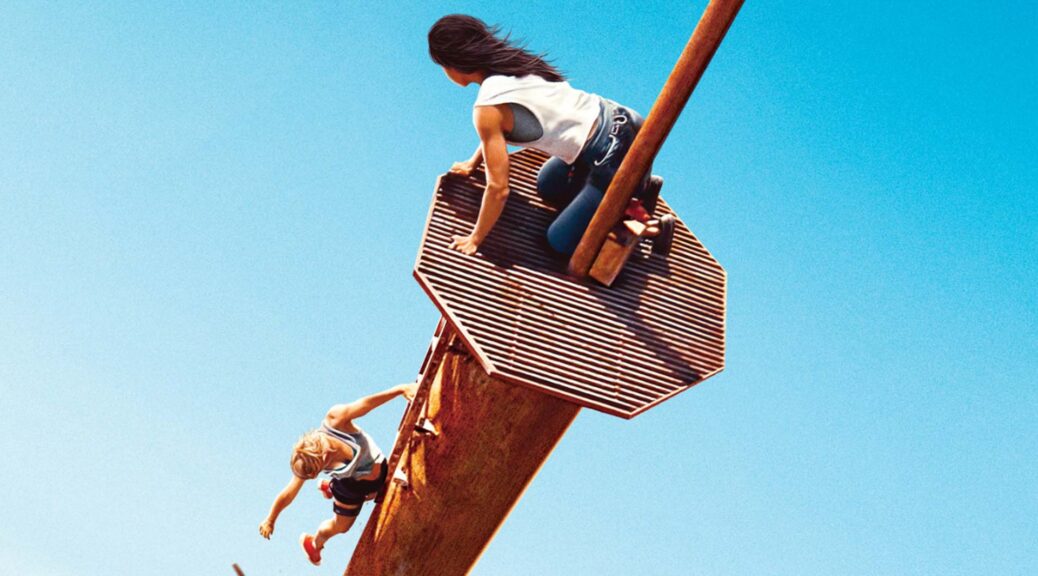 YouTubers are stupid. I think that’s the basic theme of Fall, the story of influencers proving their erroneous sense of immortality and bone-deep need for attention.

Lessons are learned and lunches are lost as two friends scale a defunct radio tower 2000+ feet into the sky. Becky (Grace Caroline Currey) is trying to overcome grief and find a reason to live again. Her best friend Hunter (Virginia Gardner) is the one who convinced her to face her fears, but if Hunter can impress her online fanbase while they’re at it, all the better.

Strong supporting performance by Garner’s bra, by the way.

The story itself is cobbled together from other sources–a touch of The Descent here, a whole scoop of The Shallows there, plenty of Open Water, lots of Frozen (no, not the “Let It Go” Frozen). Essentially, dumbasses get themselves into serious danger and we sit with them until they probably die.

Fall delivers gorgeous, stomach-churning action. The footage is really quite stunning, so if you’re going to watch it, find a big screen.

A story this spare can be and has been effective when done well, which is to say, when done lean and mean. Fall’s biggest downfall is not the acting (entirely competent), not the cloying emotional underpinnings (forgivable), not the leaps in logic. It’s not the dream sequences (the laziest plot device in all of cinema). It’s not even that one surprise twist that we all saw coming. Or the other one.

Fall clocks in at an hour and 45 minutes, which is far too long for this film. Mann and company can’t sustain the tension through the middle section well enough to merit the length. The Shallows ran under 90 minutes. Open Water delivered its powerful blow in less than an hour and twenty minutes. Shave half an hour off this film and you have yourself a brisk, dizzying effort worth a trip to the cinema.