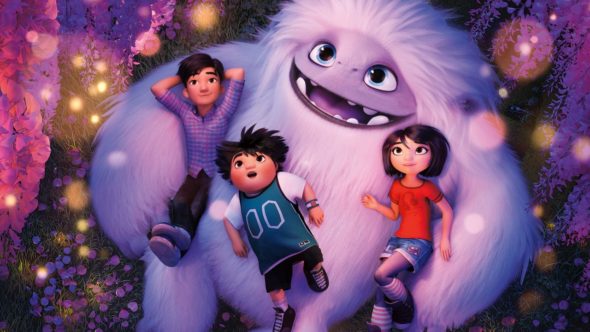 The film opens with a man-sized yeti escaping from a laboratory at the sinister Burnish Industries. While being hunted through the streets of a big city in China, the yeti is injured. He hides on the roof of a building and seems to be safe – for the time being.

The opening scene is dark and a little scary, which explains the film’s PG-rating. This is fare for older children, which isn’t a knock on the film, but it isn’t the cute romp one might expect for the 3 – 6-year-old crowd. The opening hints at more terrifying moments to come as Burnish Industries is not willing to let its latest discovery go without a fight.

The film switches gears, and we’re introduced to Yi (voiced by Chloe Bennet), a teenage girl who rushes through life doing odd jobs to make money. She’s estranged from her mother and grandmother, who don’t understand her attitude. As we follow Yi through a typical day, we are given small pieces of information to help us understand who she is. Not only is she distant from her family, she is mocked by her peers, and her only friend is a younger boy named Peng (Albert Tsai).

On the roof of her apartment complex, Yi has a hideaway where she stows a map of China, an old violin, and a dream of visiting several places across the country. It’s here that she discovers the hidden yeti.

Reminiscent of How to Train Your Dragon (another DreamWorks production), Yi slowly forms a bond with the beast she names Everest. While the development of the bond between Toothless and Hiccup in HTTYD is a slow process, the connection between Yi and Everest feels rushed. And like Toothless, Everest has behaviors similar to a cat or dog as he navigates this new world.

The few minor similarities aside, Culton manages to craft a film of her own that explores the value of friendships, family, and the beauty of the natural world. It’s a lot to explore in a children’s film and while some of it is handled well—particularly the friendships between Yi, Everest, and her friends—other aspects are neglected.

The film drags a bit during the second act. As Yi, Peng, and Peng’s cousin, Jin (Tenzing Norgay Trainor) try to keep Everest out of the clutches of Burnish Industries, there are a few montage moments that slow the film’s pace and will have even the most devoted viewer twiddling their thumbs waiting for the action to resume.

However, Abominable is a film that, while predictable, has a few good laughs and plenty of heart.