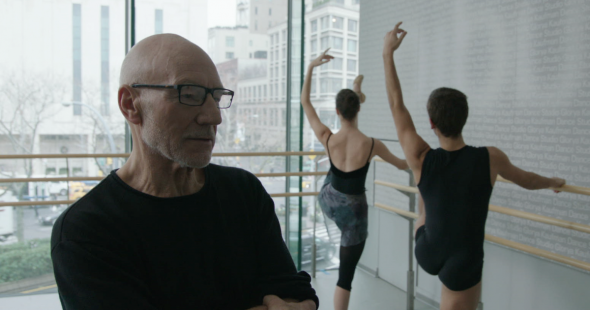 Match opens on a ballet instructor – smilingly supportive yet rigorous, the kind of mentor with a joy for teaching that inspires. He is Tobi, an aging Julliard ballet instructor played with confidence and enthusiasm by the wonderful Patrick Stewart.

Director Stephen Belber adapts his own Broadway play for the screen, and though Frank Langella originated the role on stage, it feels custom made for Stewart.

Tobi craves his solitude, yet he’s agreed to meet with Lisa (Carla Gugino), who, with her husband Mike (Matthew Lillard) in tow, wants to interview Tobi for her dissertation on classical dance choreography.

Like the Richard Linklater film Tape, also penned by Belber from his own stage play, Match is a three-way dialog about the effects of the past. But where Tape was a grim exercise in regret, Match pairs regret with celebration, and the entire effort is buoyed by Stewart’s nervous showman’s energy.

Gugina and Lillard are solid as well, she conveying the depths of tenderness and heartbreak with an expression, and he capably animating his character’s pain and its protective layer of anger. Their chemistry with the lead, particularly in more intimate, one-on-one scenes, packs a punch. But the show belongs to Stewart.

Tobi is a character, not a type, and Stewart so fully inhabits this fascinating, multi-dimensional man that the actor ceases to exist.

Belber’s casting is spot on, and his dialog is sharp and insightful. How could Stewart do anything but soar with such magnificent lines? But the film feels trapped, confined. Belber is rarely able to open up, take advantage of the opportunities cinema offers that the stage cannot. His film feels like a play.

And though the second act, surprisingly fresh and raw as Lisa and Tobi get to know each other, is very strong, the entire effort feels just slightly stale, a bit contrived, and inevitably predictable.

Still, it’s a lovely film about chance, consequences, choice. If nothing else, it’s a magnificent showcase for an underappreciated talent.