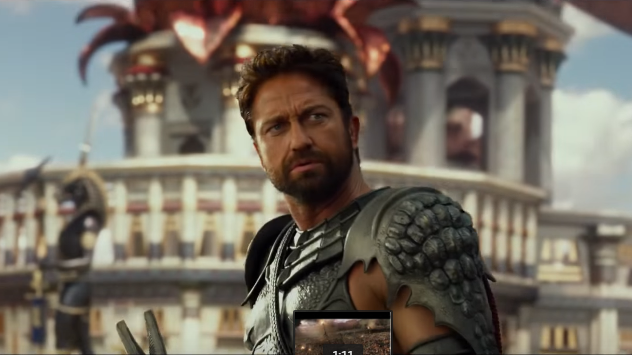 Gods of Egypt brings the deities out to play for a boring mess of ridiculousness that will make you wish they had rested one more day.

Apparently one of the 16 people that saw both John Carter and Jupiter Ascending took too much cough syrup and decided to create the mutated offspring of those travesties. Look away!

It is a time “before history began” (what?), when Gods and mortals live together but are easily identifiable, thanks to the Gods being extra large and having gold running through their veins. The two groups seem to co-exist well, with the women folk apparently bonding over a shared love of push-up bras.

But, just as the God King of Egypt (Bryan Brown) is set to abdicate his throne and bestow the crown on his son Horus (Nikolaj Coster-Waldau), the King’s malevolent brother Set (Gerard Butler) swoops in with his army and proclaims himself to be the new King.

After a struggle, Horus is in exile and the populace is enslaved by Set. But wait! A clever, spunky mortal named Bek (Brenton Thwaites) just might be spunky and clever enough to rescue his beloved Zaya (Courtney Eaton), and help Horus bring down his power-hungry uncle, all while cracking a few one-liners!

From the hilariously hyper-dramatic opening to the let’s-all-learn-something-today ending, director Alex Proyas (The Crow, I Robot) crams the screen full of CGI effects and swooping panning shots aplenty, but can’t generate any more substance than something you might watch standing in line at Disney World while dad sneaks peeks at passing cleavage.

Proyas gets no help from the script. Co-writers Matt Sazama and Burk Sharpless (Dracula Untold, The Last Witch Hunter) vacillate between camp, video-game exposition, and genuine WTF moments such as Zaya’s treatment at the hands of her “cruel” master: a sternly-worded rebuke!

The performances range from Master Thespian overacting (Butler), to big-eyebrow mugging (Thwaites) to Geoffrey Rush fighting a cloud monster (Geoffrey Rush). And, like Eddie Redmayne’s disastrous turn in Jupiter, Chadwick Boseman brings an interpretation to Thoth, the God of Knowledge, that is painfully awkward.

After more than two hours of this haplessness, you get the feeling that Gods of Egypt aspired to be some sort of swashbuckling adventure akin to The Thief of Bagdad, with a side of Indiana Jones.