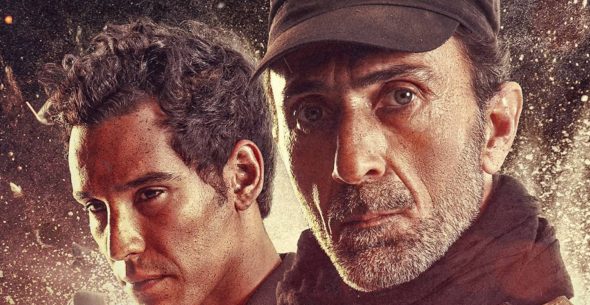 Matthew Michael Carnahan is a screenwriter unafraid to dive into the political. Though none of his films are classics, from the best (The Kingdom) to the worst (Lions for Lambs), all tell stories that combine governmental indecision with action in an attempt at cultural relevance.

As a rule, the success of his themes depends on the film’s director. So with Mosul, Carnahan has no one to blame but himself if it doesn’t work.

The film spends a single, tumultuous afternoon in the titular Iraqi city with the Nineveh province SWAT team, the only group to fight ISIS occupiers continuously from 2014 to 2017. Onscreen text clues us in to their successes, their legendary status, and their desperation to complete one last mission before ISIS finally flees the city.

En route to completing that mission, they hear gunfire and come to the aid of two standard issue uniformed police officers about to lose their lives in a standoff with ISIS. When all is said and done, one cop is on his way back to the other side of the city. The second, Kawa (Adam Bessa, Extraction), joins the rogue unit.

Carnahan shows surprising instincts when it comes to pacing. Rather than generating tension to be released with bursts of action, Mosul periodically punctuates the near-constant action with brief respites.

Carnahan knows how to make the most of these moments. We catch our breath for a glimpse of each of these men as men. The character building is brief and nearly everyone will die before we know their names, but thanks to touches that never feel scripted or heavy handed, the characters have the chance to be human.

The breathlessly paced slice of war torn life is grounded by two performances: Bessa and Suhail Dabbach, playing commanding officer Jasem. Kawa’s character evolves almost at the speed of light, turning in one afternoon from a wide-eyed, by the books police officer to an unrecognizable man with a mission.

Jasem is on the other side of that evolution and the veteran Iraqi actor makes you believe. A father figure who is simultaneously merciless and dangerously compassionate, he’s a bright and constant reminder of exactly why the unit fights.

Carnahan’s first time out behind the camera rushes at times. Kawa’s speedy transformation certainly strains credulity. But Mosul handles the political themes with a surprisingly light hand. It certainly keeps your attention and delivers eye-opening information without abandoning storytelling to do it.

He should keep directing his own movies.