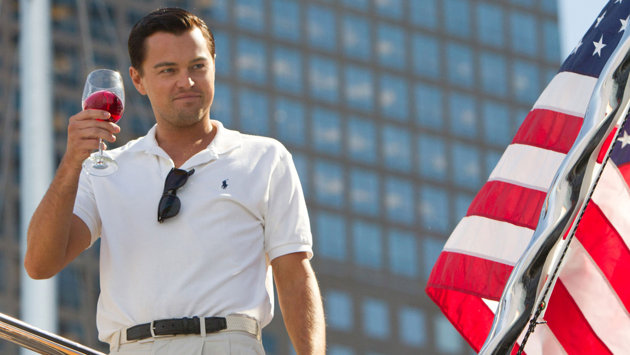 So, how rich do you want to be?

In the opening minutes of The Wolf of Wall Street, 26 year old Jordan Belfort (Leonardo DiCaprio) tells us making 49 million dollars in a year only pissed him off, because he really had his heart set on a million a week.

How did he ever pay the phone bill?

Belfort, the real life stock market wizard who hit it big in the 1990s and wrote the memoir the film is based on, was more concerned with paying for drugs, hookers, yachts and lavish parties, as well as staying one step ahead of the Feds who were looking to bring him down.

No doubt, the man has an incredible story to tell, and director Martin Scorsese tells it perfectly, uncorking a terrifically frenzied, wickedly funny three hour showcase of unchecked hedonism.

This is no hand-wringing reflection on the wages of sin, just a swaggering, appropriately superficial and completely entertaining lesson in the American dream.

DiCaprio is nothing short of electric, giving perhaps the most can’t-take-your-eyes-off-him performance of his career. He takes Belfort from a wide-eyed Wall Street rookie (under the unhinged tutelage of Matthew McConaughey in a priceless cameo) to a drug-addled zillionaire with the perfect blend of vanity and paranoia, always leaving you anxious for his next move.

As Belfort’s partner-in-crime Donnie Azoff, Jonah Hill again delivers a terrific supporting turn, and one particular scene with he and DiCaprio wrestling over a telephone, both characters locked in a quaalude stupor, is alone worth the price of admission.

Scorsese and screenwriter Terence Winter strike just the right tone with the story of Belfort’s rise and fall. They invite comparisons to both Gordon Gekko’s “greed is good” speech and Scorsese’s own Goodfellas, then remind you this is another era entirely as DiCaprio breaks the fourth wall, speaking asides directly to the audience as if we were accomplices. Which, of course, we are.

The ridiculous degree to which America worships the uber-rich deserves the riotous, foot on the gas, keep up or get out approach Scorsese employs.  Belfort and his ilk knew only one credo:  bigger, louder, faster, more. That’s exactly what TWOWS delivers.

Sit down, shut up, and get ready for a helluva ride.