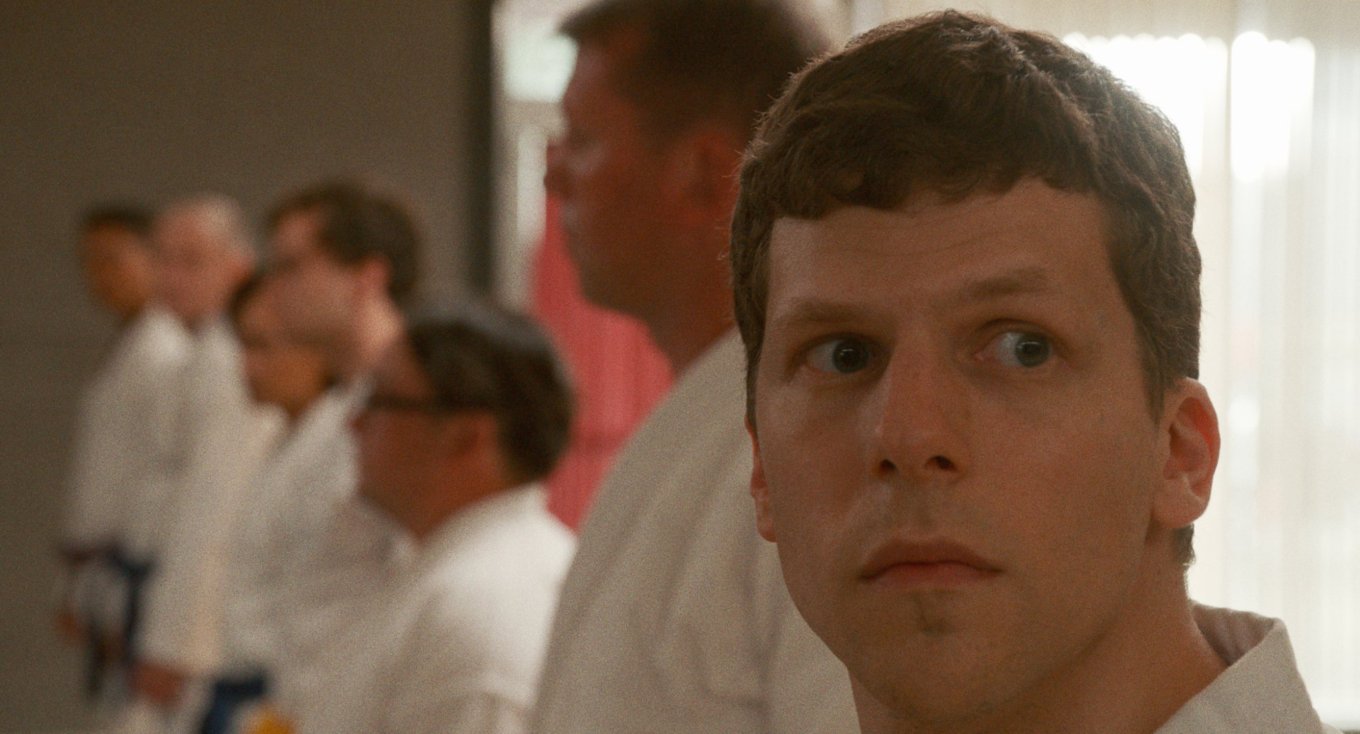 The Art of Self-Defense

This humiliating exchange happens between Casey (Jesse Eisenberg) and Sensei (Alessandro Nivola) as Casey excitedly signs up for karate lessons. Casey suffers from a severe lack of confidence. He leads a drab, boring life. His house? Boring. His job? Boring. Even his dog is boring. No one respects Casey. His coworkers barely register his existence. The final demeaning moment is the night he’s viciously attacked while walking home from the store. Karate seems like the perfect antidote for this life of mediocrity.

Watching The Art of Self-Defense made me think of Fight Club. A lot. Fight Club overflows with masculinity. Brawny men beating each other to a pulp while waxing philosophical is the film’s bread and butter. Fincher’s movie definitely comments on the toxicity of masculinity, but it also spends a heck of a lot of time glorifying it, too.

The Art of Self Defense is interested in what it means to be a “real man.” Outside of Casey, the men in this dojo operate through sheer brute force. Violence, intimidation and blackmail are how they make their world work. Casey’s gravitational pull to these figures is a tale as old as time. Writer/director Riley Stearns isn’t interested in reveling in this world Sensei has created, he’s more interested in pushing the audience to share in Casey’s horror as he experiences it.

It’s easy to look at many of Eisenberg’s roles and lump them into the same narrow category. Yes, he plays a lot of isolated losers that stammar and shuffle around, but he also plays those roles with varying degrees of nuance. There’s a level of fear and anxiety he brings to Casey that feels different from his other loveable nerds. Casey is a rubber band about to snap at any moment, and Eisenberg does a fantastic job of keeping the audience guessing as to when that will happen.

Nivola’s Sensei has an air of false machismo to him at all times. He speaks in a low, gruff voice, and his words feel precisely selected, but fake. Nivola gets that this movie is a stark black comedy, and he completely goes for broke. He is able to walk this fine line of playing a scene straight, yet has it come off as a comedic masterstroke.

Armed with biting satire, excellent performances, and more on its mind than cheap laughs, The Art of Self Defense delivers a bold, original dark comedy. Minimal flexing involved.