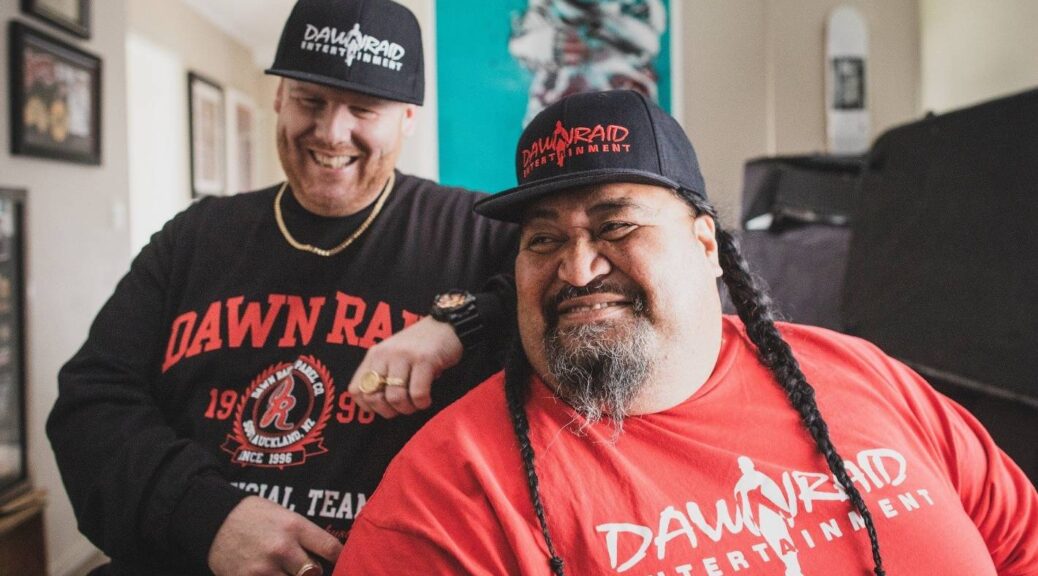 “Delightful” is a word I wouldn’t expect to use to describe a documentary about the rise and fall of a hip-hop empire. And yet, there you have it. Dawn Raid, Oscar Knightley’s doc about the seminal New Zealand rap label, is just that: delightful.

The main characters in the tale, Dawn Raid co-founders Danny “Brotha D” Leaosavai’i and Andy Murnane, are delights themselves. Humble, funny, self-deprecating and excellent storytellers, the duo tell their tale the way a buddy might over a few beers.

The pair met taking a trade school business course that preached entrepreneurial spirit. Well, these two had that, so why finish the training? They wanted to start South Auckland’s first hip-hop label. To generate funds, they made and sold t-shirts.

The t-shirts, like their label’s own name, took ugly stereotypes about Polynesians and turned them on ear. (Dawn Raid itself refers to racist, government-sanctioned police action meant to rid NZ of unwanted Polynesian Islanders who’d outstayed their welcome.)

The joy and community pride that infects the pair’s actions inform not only their entire career but the film itself. While Murnane talks consistently of his desire to go bigger and get richer, it’s clear that both entrepreneurs wanted primarily to give South Auckland the chance to show the world its worth.

And it did. Beyond the charm of the film’s leads is the joy of the music itself. Knightly is wise to showcase each of Dawn Raid’s major artists—Deceptikonz, Adeaze, Aaradhna, Mareko and Savage. This not only provides a remarkable soundtrack, but it amplifies the impressive and unique style of music Dawn Raid recorded.

The typical ups and downs associated with this kind of music doc take on a freshness for the sheer energy Murnane brings to the film. Not a moment is wasted on regret, even though the digital age and the NZ government were not kind to Dawn Raid.

Still, Leaosavai’I and Murnane have little but joy to share when they remember the ups and the downs. Regardless of the fact that the outline is the same as many an entertainment doc, the soul is as jubilant as the music.