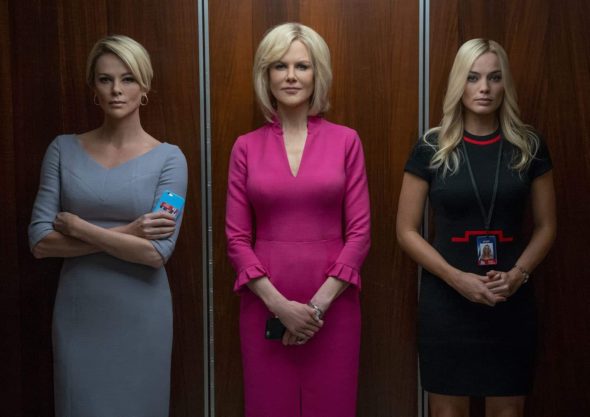 Bombshell, Jay Roach’s depiction of the unrepentant sexual harassment that poisoned the work atmosphere at Fox News, is equal parts cathartic and depressing.

Buoyed by strong lead performances in a trio of unerring talent—Charlize Theron, Nicole Kidman and Margot Robbie—the film also leans on an incredible and sizable ensemble to deliver a surprisingly nuanced look at the shades of grey, of complicity and responsibility when it comes to sexual harassment.

“It’s all of our jobs,” she disagrees.

No surprise the script comes from The Big Short scribe Charles Randolph. Roach’s film benefits from the same kind of thoughtful, informative, funny and “can you believe this?” approach, but Bombshell lacks much of the rage and outright comedy of an Adam McKay film.

Like McKay, Roach left comedies behind in favor of headier, sharper, more political material. Also like McKay, his comedic sensibilities breathe some life into the efforts, helping this film serve the dual purpose of entertaining and informing. And, like McKay, Roach knows how helpful a well-placed comedian can be.

Kate McKinnon actually does a lot of the film’s narrative heavy lifting. (Is it wrong I wanted her to play Rudy Giuliani as well?) As a Bill O’Reilly producer who befriends Kayla and helps her better understand the Fox New world, she allows Roach to make salient points about the network and the way it’s run, but because McKinnon is naturally funny and incredibly talented, it feels organic.

Her character’s position when it comes to rocking the boat also offers a clear-eyed take on why toxic work environments can go unchecked for so long. Since McKinnon’s character is in many ways the one the audience will most relate to, this is a sly and successful maneuver to keep us from feeling too superior and enabling us to better empathize with characters we may not like as well.

Enough cannot be said for the work of Roach’s makeup department, especially that of prosthetic make up designer Kazu Hiro. Theron’s imperceptible prosthetic—along with her own posture and voice work—turn her into an alarming replica of Kelly. Ditto Nicole Kidman, and John Lithgow, whose performance as Roger Ailes also delivers a wallop.

Not that any of this matters if the three central performances lacks in any department. They don’t. Characteristically, Theron, Kidman and Robbie deliver exceptional work, each willing (as they always are) to depict a woman who is not always (or, in some cases, is rarely) likable but who deserves respect and empathy for her suffering and courage.

Wisely, Roach and team don’t get swept away by the bracing change and empowerment of victory. Indeed, Bombshell’s final act is a smack I still feel. But its power is its honesty.