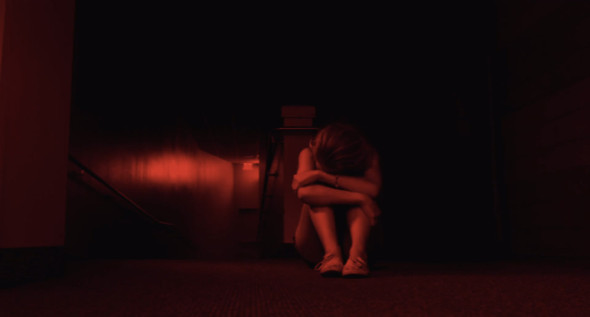 Ever have that dream where you’re trapped inside your old high school? I think maybe Travis Cluff and Chris Lofing have. They work through their issues with the theatrical horror show The Gallows.

The writing/directing duo resort to found footage to tell their tale. What you’re watching is Nebraska police evidence – so kind of the cops to edit together multiple different camera sources for us! The footage captures the horrific events surrounding the high school production of The Gallows.

First, the good news: You don’t have to actually watch a high school play. Whew!

Twenty years ago a boy died during a performance. To honor that anniversary, the school puts on the same damn play. Now that’s just in poor taste. As retribution, someone or something terrorizes the kids who break in to the school the night before the performance to bust up the sets. Scamps!

Like the surprise fun of this summer’s Unfriended, The Gallows taps some insightful ideas concerning modern teens – like that they are, on average, stupid enough to film themselves committing felonies. This film also has some fun at the expense of drama kids, as well as those kids who believe they are way too cool for high school theater.

The original trailer for this film was a scream, and the scene it depicts remains the film’s high water mark in terms of terrifying fun. Set decoration is spooky and the brisk 81 minutes offers a goodly number of jump scares.

Performances are generally solid, too. Pfeifer Ross, in particular, strikes the perfect note as the perky, earnest drama kid, while Ryan Shoos is equally on-mark as the insecure, douchey jock. A couple of supporting turns are fun as well in a movie that hopes to quickly create a believable high school microcosm before it turns into a predictable if entertaining riff on some familiar horror ideas.

It’s better than going back to high school, that’s for damn sure.