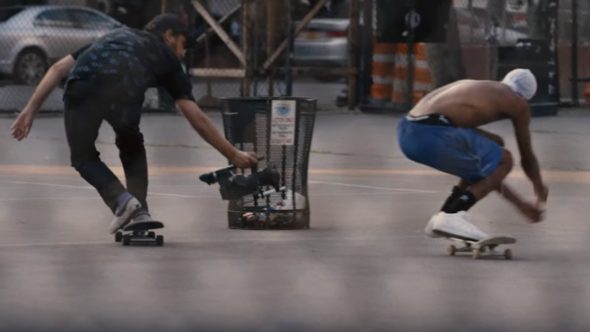 All the Streets Are Silent: The Convergence of Hip Hop and Skateboarding (1987-1997)

Tracing the ancestry, briefly, to NYC artists Andy Warhol and Jean-Michel Basquiat, the film credits the convergence of the movements to the prescience of the club management department at Club Mars, a multistory nightclub in the Meatpacking District.

In the early 90s, Mars had a weekly hip hop party that started in the basement and attracted a broad swath of NYC street culture. The bouncers let the skate kids in, even if they were all gross and sweaty and not dressed up. Their streetstyle was cool. And the cross-pollination began.

Out of this came:

As the film reminds us, skateboarding is now an Olympic event and a $2 billion per year industry and hip hop surpassed rock recently as the dominant music genre.

Elkin and Brown stuff their documentary full of interviews from the people who were part of the scene in the 90s like Kid Capri, Stretch Armstrong, Bobbito Garcia, and Mike Carroll. Archival footage was supplied by Eli Morgan Gesner, who had the presence of mind to shoot video of the skateboarders doing tricks and the rappers trying out rhymes. This grounds the film in the visual aesthetic of the period while the original score by hip hop producer Large Professor provides the aural vibe.

It all comes to resemble video scrapbook of the baby years of what’s become a mainstream aesthetic. And, while I’d prefer more coverage of the gradual gentrification of the aesthetic from an outsider scene to a branded “lifestyle,” that’s not really the project here. As a nonfiction narrative looking back on all the individuals and circumstances who mixed together in 90s downtown NYC, All the Streets Are Silent is pretty fly.