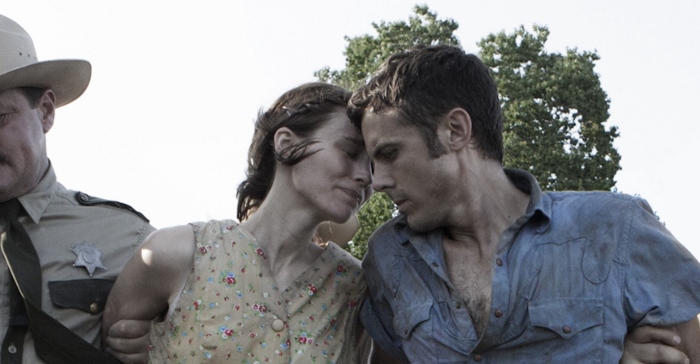 The screen fills with the sepia image of a bygone Texas. Sinewy lovers quarrel and forgive, then wait in a pick-up, planning a future with their unborn baby, until the third robber arrives. There’s a chase, a lonesome shack, a shoot out, and a compromise that sends the boy away to prison and the girl home to pine.

There’s good reason writer/director David Lowery’s romantic tragedy Ain’t Them Bodies Saints feels so confident. The breathtaking cinematography, the fittingly artistic framing, the poetry of the language and image, the heartbreaking authority of the performances – each element fits together beautifully and benefits from the artistic coordination of a maestro. It’s because the relatively unknown Lowery has honed his craft, spending time as a casting director, crewman, writer, director, sound editor, actor, producer, and cinematographer before tackling this, the culminating effort of a lifetime spent in film.

He’s blessed with a cast that embraces his understated drama. Casey Affleck animates a career full of characters with vulnerability and confused nobility, and he impresses again here as the outlaw who breaks out of prison, just like he promised, to reunite with his girl and the daughter he’s never met.

Rooney Mara’s quiet ferocity offsets Affleck’s tenderness, and the love story they create offers a poignant center to the film. Orbiting the couple is Ben Foster’s humble police officer, torn by his affection for one and duty to the other. Each actor embodies an image of lonesomeness that makes the film ache. What’s beautiful about this triangle is that neither the characters nor the filmmaker judges anyone. Lowery and his characters accept, however sadly, the motivations and actions of all involved.

The young mother also attracts the protective nature of a retired gangster/father figure played by Keith Carradine, whose presence reinforces the film’s bluesy connection to the other great, doomed Western romance, McCabe and Mrs. Miller.

The film’s one shortcoming is that it does not tell a larger tale. This beautifully told story of loneliness, devotion, love and tragedy never manages to transcend its own intimacy to speak to something universal.

But it’s a hell of an effort, and one that establishes Lowery as one of the most exciting new filmmakers to come along in decades.