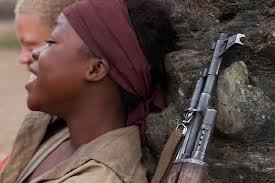 I am beginning to believe the best actors working today are not yet old enough to drink beer. Most aren’t old enough to see PG-13 films. War Witch does not dissuade me from this opinion.

In the film, writer/director Kim Nguyen takes a path similar to that of the magnificent Beasts of the Southern Wild or the poignant and lovely Lore. He uses a child’s point of view to detail individual suffering, crafting a troubling yet wondrous tale of resilience.

Beasts of the Southern Wild – among the very best films of 2012 – exposed audiences to the horror of a hurricane through the eyes of a little girl (the ferocious Quvenzhane Wallis, then 6 years old) living in its wake.  Likewise, Cate Shortland’s lyrical Lore introduces an adolescent Hitler Youth (a heartbreaking Saskia Rosendahl, then 17), as an opportunity to see the immediate aftermath of WWII in a new and touching way.

Nguyen’s heroine in War Witch survives something even more unimaginable. Kidnapped at 12 and forced into the life of a child soldier in Sub Saharan Africa, Komona (a miraculous Rachel Mwanza, now 16) accepts the horror, suffering and survival around her as part of the nightmare world she must endure.

The film’s impressionistic, almost surreal atmosphere mirrors the thinking of the child at the heart of the story. There’s little on earth more irrational, or more fraught with dark magic, than war. So certainly it makes sense, when detailing one 12-year-old girl’s plight when war comes calling, to use her point of view and cast a bit of magical realism, however horrific.

Nguyen’s approach, blending a straightforward sensibility with elements of the supernatural, is perfect: candid and unsentimental but cloudy with juvenile logic, it articulates the point of view of a child, it mirrors the incomprehensible suffering of war, and it allows him to tell the story without bending to overt politicizing.

Cinematographer Nicolas Bolduc marvelously recreates the almost inconceivable horror in a way that is understated enough for an audience to begin to understand how a human being withstands it. Through his lens we see the resilience of a child, and of the human race itself.

Mwanza’s warm, quiet, phenomenal performance can’t be ignored. In a powerful debut she shoulders the film – appearing in every scene but one. It is through her narration that we learn, without bombast or melodrama, about endurance.