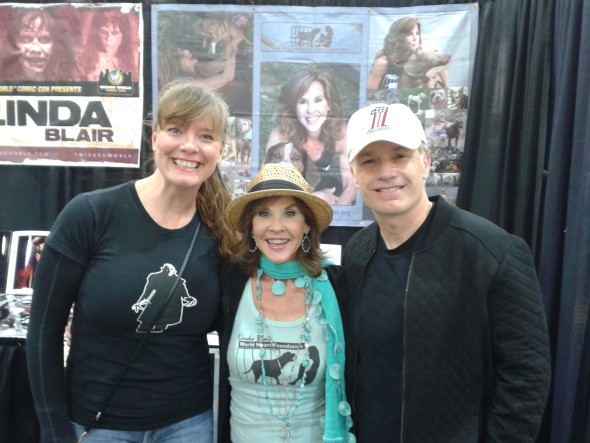 The Seventies is when horror really took off. Blockbuster masterpieces like Alien and Jaws affected countless viewers and at least as many future filmmakers. Maverick young directors like Brian De Palma, Wes Craven, Tobe Hooper, John Carpenter, David Cronenberg and Dario Argento developed into the cinematic voices of a generation. Major studio efforts with A-list casts like The Omen kept the genre on the front burner for all movie goers, and Blaxploitation reached into the genre with the Blacula series.

We had to leave a lot off this list. In what may be the most crowded field of any decade, here we boil down the five best horror films (strictly horror – sorry Jaws & Alien!) of the 1970s.

5. Nosferatu the Vampyre (1979)
In 1922, F.W. Murnau directed maybe the best vampire film we’ll ever see: Nosferatu. In 1979, Werner Herzog lovingly remade it. Both films are obviously based on Bram Stoker’s Dracula novel, but where Stoker saw romance, these German filmmakers saw pestilence.

Herzog’s images are dreamy and wonderful, and the twists he gives the fairly tired storyline are genius. Isabel Adjani’s Lucy gets to be the hero, and the alteration to her beloved Jonathan Harker’s character is the work of dark genius.

No film is more responsible for the explosion of teen slashers than John Carpenter’s babysitter butchering classic.

Sure, you’ve seen it, but from the creepy opening piano notes to the disappearing body ending, this low budget surprise changed everything. Carpenter impeccably develops anxiety, breaking tradition by planting it right in a wholesome Midwestern neighborhood. You don’t have to go camping or take a road trip or do anything at all – the boogeyman is right there at home.

Michael Myers – that hulking, unstoppable, blank menace – is terrifying. Pair that with the down-to-earth charm of lead Jamie Lee Curtis, who brought a little class and talent to the genre, and add the bellowing melodrama of horror veteran Donald Pleasance, and you’ve hit all the important notes. Just add John Carpenter’s spare score to ratchet up the terror. Nice.

Sissy Spacek is the perfect balance of freckle-faced vulnerability and awed vengeance, but she may be overshadowed by Piper Laurie’s glorious evil zeal as her religious nutjob mother. (Both were Oscar nominated.) We feel proud and cautiously optimistic when Carrie finally stands up to her mother, but Senior Prom, or “Love Among the Stars,” doesn’t go as well as it might have for poor Carrie White or her classmates. One ugly trick involving a bucket of cow’s blood, and Carrie’s psycho switch is flipped. Spacek’s blood drenched Gloria Swanson on the stage conducting the carnage is perfectly over-the-top. And after all the mean kids get their comeuppance, Carrie returns home to the real horror show.

The prom scene inspired a Halloween costume for us a couple years ago – we won best costume and a free round! 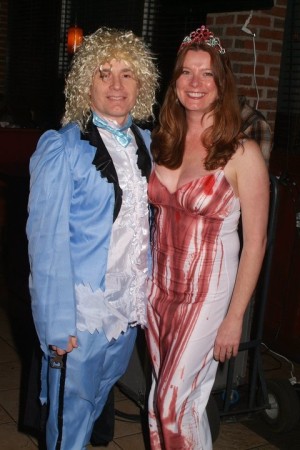 Not everyone considers The Texas Chainsaw Massacre a classic. Those people are wrong. Perhaps even stupid. It is classic because Hooper masterfully enlisted a low rent verite for this bizarre story to do something utterly new. The camera work, so home-movie like, worked with the “based on a true story” tag line like nothing before it, and the result seriously disturbed the folks of 1974. It has been ripped off and copied dozens of times since its release, but in the context of its time, it was so absolutely original it was terrifying.

Poor, doomed, unlikeable Franklin Hardesty, his pretty sister Sally, and a few other friends head out to Grampa Hardesty’s final resting place after hearing the news of some Texas cemeteries being grave robbed. They just want to make sure Grampy’s still resting in peace – an adventure which eventually leads to most of them making a second trip to a cemetery. Well, what’s left of them.

We got to meet Gunnar Hansen (Leatherface) and Marilyn Burns (Sally) a couple years ago. We were pretty geeked! 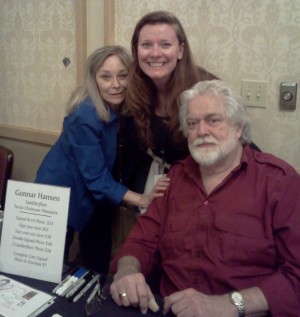 Slow moving, richly textured, gorgeously and thoughtfully framed, The Exorcist follows a very black and white, good versus evil conflict: Father Merrin V Satan for the soul of an innocent child. But thanks to an intricate and nuanced screenplay adapted by William Peter Blatty from his own novel, the film boasts any number of flawed characters struggling to find faith and to do what’s right in this situation. And thanks to Friedkin’s immaculate filming, we are entranced by early wide shots of a golden Middle East, then brought in a little closer to watch people running here and there on the campus at Georgetown or on the streets of NYC.

Then we pull in a bit closer: interiors of Chris MacNeil’s (Ellen Burstyn) place on location, the hospital where Fr. Karras’s mother is surrounded by loons, the labs and conference rooms where an impotent medical community fails to cure poor Regan (Linda Blair).

Then closer, in the bedroom, where you can see Regan’s breath in the chilly air, examine the flesh rotting off her young face. Here, in the intimacy, there’s no escaping that voice, toying with everyone with such vulgarity.
The voice belongs to Mercedes McCambridge, and she may have been the casting director’s greatest triumph. Of course, Jason Miller as poor, wounded Fr. Damien Karras could not have been better. Indeed, he, Burstyn and young Linda Blair were all nominated for Oscars.

So that’s it! We hope you agree, but let us know if you don’t, and be sure to listen to the entire podcast on Fright Club!