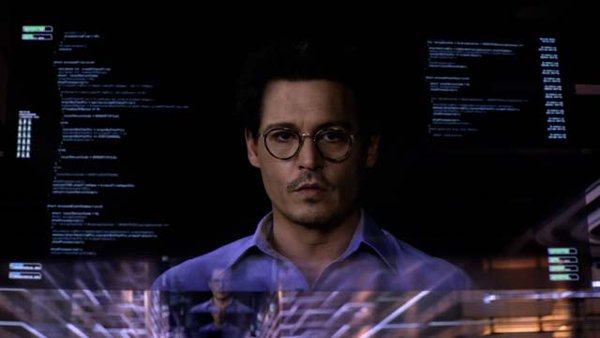 Johnny Depp fans could use a little good news. The genuine talent hasn’t made a film worth watching since 2011’s Rango, and that was a cartoon – and his only half-decent movie since 2007’s Sweeney Todd.

Depp plays Dr. Will Caster, a very happily married scientist doing research that will make unfathomable breakthroughs in artificial intelligence. And oh what a muddled mess it turns out to be. The movie, I mean. The A.I. turns out to also be Johnny Depp, which beats the hell out of Arnold Schwarzenegger any day.

Making his debut as a feature director is Wally Pfister – Christopher Nolan’s go-to cinematographer. Predictably, the film has an evocative look. Unfortunately, he did not pick up his colleague’s grasp of the intricacies of a heady fantasy.

Jack Paglen’s screenplay offers a cautionary tale about our blind acceptance of the invasion of technology. Unless it’s warning us about pollution. Our personal isolation? Lack of privacy? All of the above, often while undermining its own other arguments? Bingo.

Basically, Paglen bites off more than he or his cast can chew. The film offers sparks of relevance, but it can’t decide what direction to go. It layers its fantastical warnings around a love story, and at least for that it relies on the natural talent of its leads, Depp, Rebecca Hall, and Paul Bettany as their colleague and friend.

Their work draws whatever attention the film manages to pique. Unfortunately, it’s not enough, particularly since their tale is saddled with a dopey ending that defies even the film’s own nonsensical internal logic.

But at least it’s not Lone Ranger.