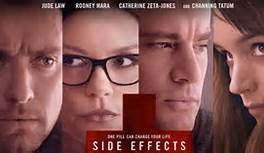 This week, the latest from director Steven Soderbergh is out on DVD, and we’ll pair it with one of his earliest for a twofer from a guy whose style is hard to pin down.  Side Effects is a mystery thriller inside the world of pharmaceuticals, a new addition to his string of mid-budget genre pics. As is often the case with this particular genre, to say much more would be to give away too much. Coursing with Soderbergh’s cynicism and varnished with his laid back style, the film has more in store for you than the diatribe against Big Pharm it appears to deliver at first.

If you’re looking for something really, really different from the same filmmaker, let us recommend his 1996 effort Schizopolis. It is among the weirdest films you’ll ever see. Created as a way to clear Soderbergh’s creative cobwebs, this intensely self indulgent work (we mean that in the best way) follows Fletcher Munson (Soderbergh), speechwriter and emotionally distant husband, and dentist/doppelganger Jeffrey Korchek (Soderbergh again) through the obsessions that keep them from noticing the unsavory behavior of Elmo Oxygen. Or something.