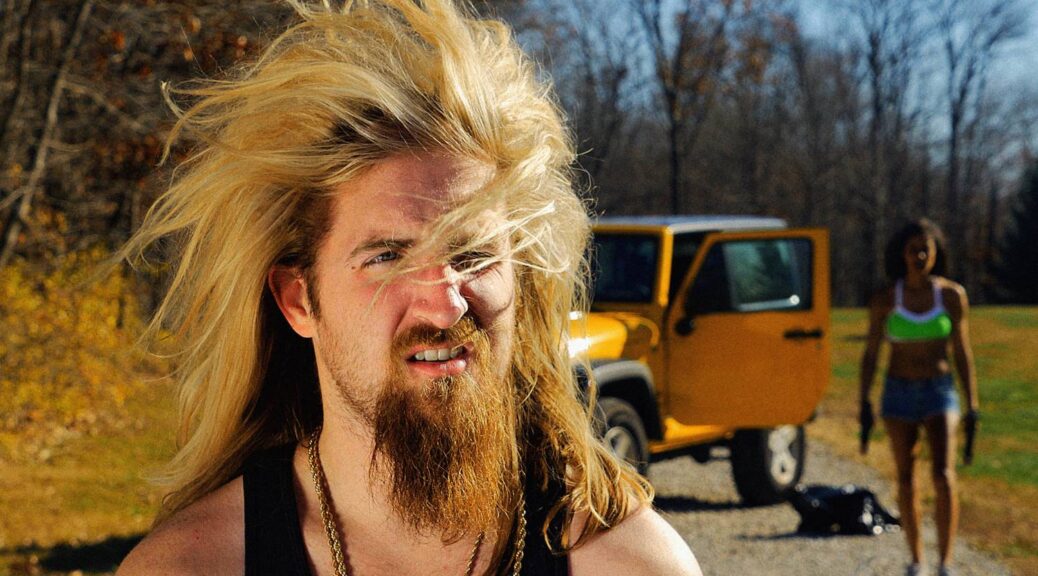 The title of Ninja Badass also serves as a statement of purpose: if nothing else, this is a movie that knows what it wants to be.

Ryan Harrison, the movie’s (take a quick breath) writer/director/producer/actor/special effects guy, clearly has a vision for his low-budget cult flick. Ninja Badass aims for somewhere between midnight grindfest and “so bad it’s good.” Harrison remains dedicated to hitting that mark far more than sticking to an even remotely coherent story.

Rex (Harrison), an aimless Midwesterner fresh out of jail, finds himself on a journey. He aims to become a “real ninja” and save hot babes from ritual sacrifice at the hands of the Ninja VIP Super Club, run by the supremely evil Big Twitty (Darrell Francis). Along for the ride are his best friend Kano (Mitch Schlagel), new sensei Haskell (Steven C. Rose), and the mysterious and formidable Jojo (Tatiana Ortiz).

And… that’s pretty much it. The movie is less concerned with developing its leads than using them as human canvases for explosions, torn limbs and pureed puppies. The trail of destruction these ninjas leave across Indiana is immense, with copious digital blood sprays augmented by enjoyably gross practical effects and gore.

It would be a category error to spend a lot of time trying to figure out whether or not Ninja Badass is a good movie. Are numbers spicy? Can vegetables convert Eastern to Mountain Time? These aren’t the right questions.

Good movie? Bad? Ninja Badass is certainly an offensive one, almost deliriously so with the star-spangled Midwesterners constantly misunderstanding and conflating an entire continent’s worth of influences and languages. We’re clearly meant to be in on the joke, although Harrison dips into that well a bit too often.

Ninja Badass is also highly watchable, if you can allow yourself to have as much fun as Harrison clearly had getting this made. The action wears too thin by the end for the film to become a full-blown cult classic like the unintentionally bad films it borrows from. But this is also a country that gave American Ninja enough sequels to be considered a proper franchise. In the pantheon of weird white dude ninja movies, Ninja Badass more than holds its own.