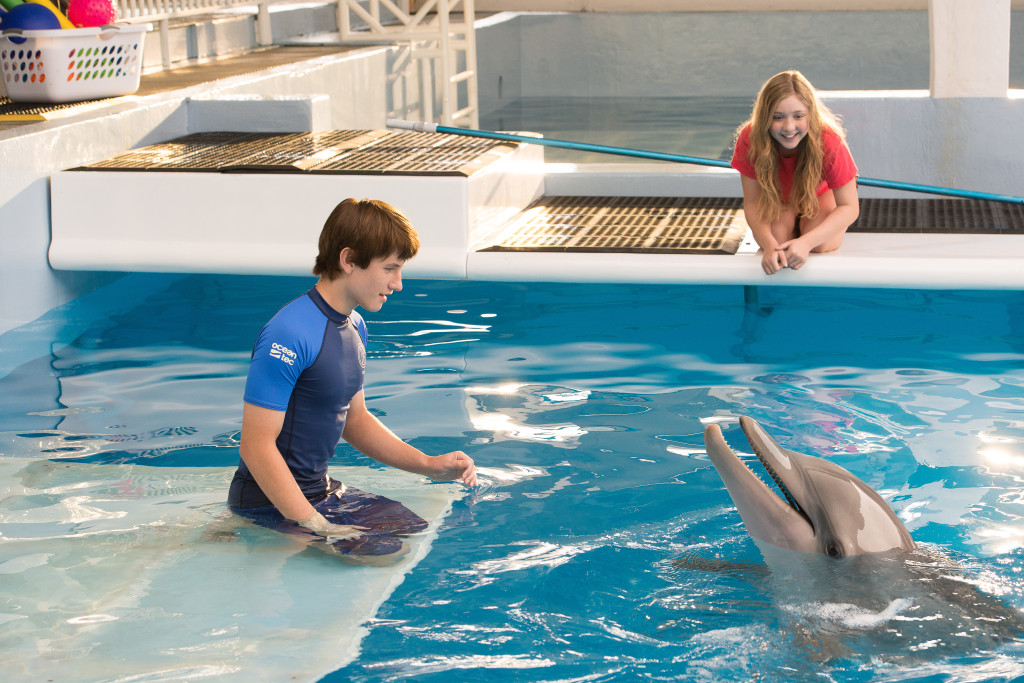 After seeing the trailer for Dolphin Tale 2, a friend of mine remarked, “Wow, did someone order extra cheese?”

That’s a good line, and a fair point, but the entire film spreads the schmaltz out much more evenly, resulting in a sweet, satisfying family film.

The entire cast returns from part one, along with director Charles Martin Smith, who also adds writing duties. His workmanlike script is based on more true adventures at the Clearwater Marine Hospital where Winter, the inspirational dolphin with a prosthetic flipper, has been acting strangely.

Her longtime pal Panama has passed away, and if the hospital staff can’t find a suitable replacement  to provide Winter some essential social interaction, they will lose her to a Texas facility. Injured dolphin Mandy might be the answer, but when she recovers enough to return to the open ocean….what to do?

Meanwhile, Winter’s human buddy Sawyer (Nathan Gamble) has been offered a great opportunity to earn college credit on a live-aboard marine biology expedition, but he can’t seem to commit. He’s hesitant to leave not only Winter, but his mother Lorraine (Ashley Judd) and his best friend Hazel (the charming Cozi Zuehlsdorff).

Yes, the symbolism Smith employs with a child leaving the “nest” and an animal in the wild is obvious, but it’s handled in such an earnestly sweet way that the melodrama never becomes overbearing.

Same goes for almost everything in the movie. The characters lack depth, the dialogue is often superficial and the plotting reeks of an after school special…but there’s a mighty big heart here, and a nice message, too.

Together they let Dolphin Tale 2 exist in a world where cynicism doesn’t stand a chance, and sometimes, that’s a refreshing place to be.