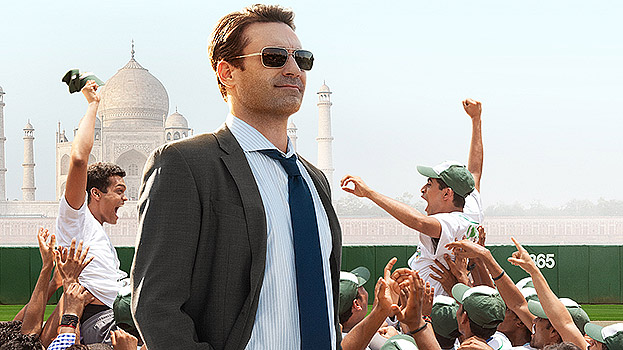 Disney – the studio who brought you Miracle, The Rookie, and Invincible – needs a family-friendly sports movie for the summer. It must be based on a true story. It requires one or more underdogs, a romantic subplot, and plenty of opportunities for lessons learned. Fish out of water are a plus.

The only surprising thing about Million Dollar Arm is the group of people who convened to answer Disney’s ad for a blockbuster.

Director Craig Gillespie (Lars and the Real Girl) and screenwriter Thomas McCarthy join a talented cast who, collectively, have no business making a predictable crowd pleaser like this. McCarthy, in particular, had a flawless resume up to now, having written and directed the brilliant Station Agent, The Visitor, and Win Win and having written the Pixar masterpiece Up. What’s going on here?

The two inexplicably crafted a film from the true(ish) story of down-on-his-luck sports agent JB Bernstein (Jon Hamm) and his plan to find the next great MLB pitcher in India. And while Million Dollar Arm is equal parts Slumdog Millionaire and Jerry Maguire, and is obvious as all get out, it’s somehow pleasant and appealing.

The filmmaking duo seem to embrace the cliches of their topic, and they manage to expose some ugly realities – sports capitalism, for instance – while they’re at it. They are aided immeasurably by a cast that, too, has far too much talent to be involved with this film.

Jon Hamm embodies the flawed humanity of his character beautifully. While his romantic entanglements are as unmistakable as the hard-won lessons in his near future, his grace and humor provide enough distraction to almost overcome the lack of surprise.

Likewise, neighbor/love interest Lake Bell and potential MLB phenoms Suraj Sharma (Life of Pi) and Madhur Mittal (Slumdog Millionaire) charm in roles that could easily have been one-dimensional. Instead, the three develop a sweet chemistry and find a little believable complexity for their characters.

Alan Arkin, on the other hand, offers the same performance we’ve seen from him in his last 20 or more films, while Bollywood star Pitobash settles for broadly drawn comic relief.

Together it’s a mish-mash effort that has no business entertaining as much as it does. Even penned inside a formula, McCarthy can write, Hamm can act, and Gillespie can make it all appear fresh regardless of the fact that we know from the opening credits exactly what we’ll see by the time those credits roll again two hours later.