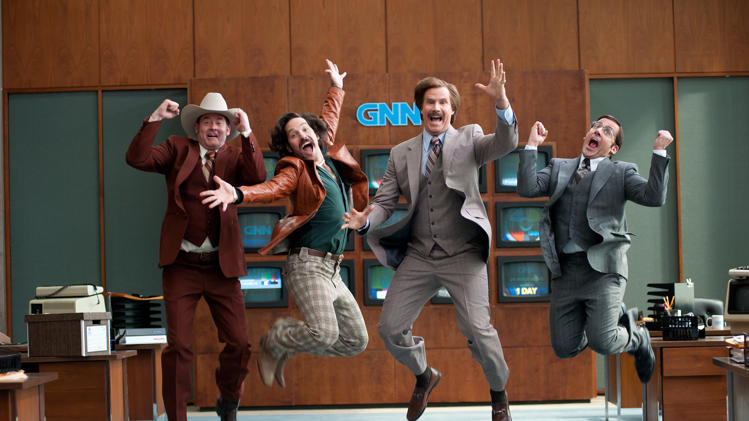 According to facebook comments, there are humans out there who don’t think Will Ferrell is funny, and say they don’t understand all the fuss about Anchorman 2, and you know what was really funny? Delta Farce.

I am not one of those people.

Look, I’m not going to tell you The Legend Continues is as funny as the original, because , Great Odin’s Raven!, you’d know I was lying. But it is funny, sometimes downright eye-wateringly hilarious.

The swinging 70s have given way to 1980, as Ron Burgundy (Ferrell) and his news team move to New York to join GNN, the very first 24 hour news network. After finding themselves on the graveyard shift, Ron, Brick (Steve Carell), Brian (Paul Rudd) and Champ (David Koechner) set their sights on moving into primetime and taking down the network golden boy (James Marsden).

Ferrell and co-writer Adam McKay (who also directs) get more pointed in their satire of TV news in round two, which seems a natural progression. Occasionally, things get a tad too obvious, but the overall subject of the sad state of broadcast journalism is still so ripe for ridicule that the film is always able to recover pretty quickly.

Two curious plot points hold this new Burgundy adventure back from striking ratings gold, one involving Ron’s health and another concerning his strange choice of new pet (don’t worry, Baxter’s still around). Both subplots fall flat, bloating the film by at least twenty self-indulgent minutes that were better relegated to the deleted scenes section of the DVD.

The other 100 minutes, though, are chock full of nutty goodness. The four core actors again excel at this rapid fire, improv-heavy brand of comedy (especially Koechner, who jumps up a notch this time) and the new faces (Kristin Wiig, Meagan Good, Greg Kinnear) blend in well. Expect some inspired sight gags (keep an eye on that news ticker), well-played homages to the best moments from part one, a litany of welcome cameos, and a small reprise at the end of the credits.