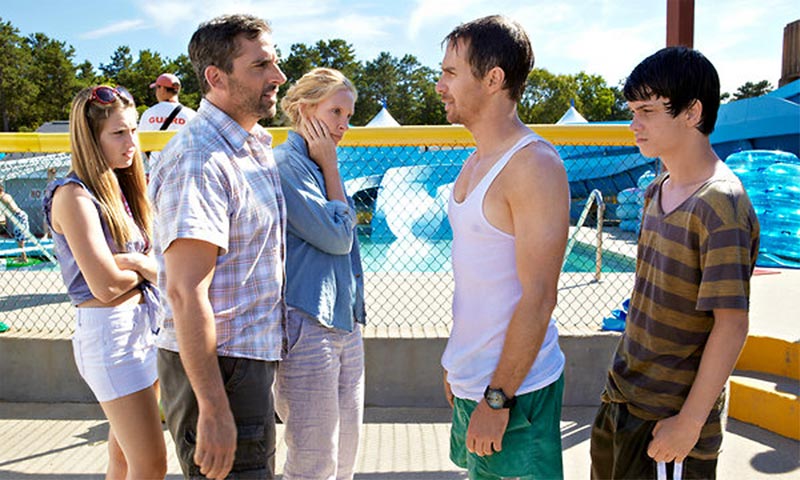 When I was young, my brother and I called it “the way back,” that place at the rear of an old station wagon just big enough for a kid to take refuge.

Nat Faxon and Jim Rash call that same area, and their new film, The Way, Way Back, a poignant and often very funny look at the bittersweet awkwardness of adolescence.

Faxon and Rash actually wrote the script years ago, but couldn’t get it sold. Then they won an Oscar in 2011 for co-writing The Descendants, and decided to spend their new Hollywood capital by resurrecting the old project and directing it themselves.

The centerpiece is 14 year old Duncan (Liam James), who is truly underjoyed at having to spend summer vacation with his mom Pam (Toni Collette), her tool boyfriend Trent (Steve Carell) and his daughter.

Things start to look up when Duncan stumbles into a job at Water Wizz, the local water park (Water Wizz!). Falling under the tutelage of Owen, the Wizz manager (Sam Rockwell) Duncan gets a fresh outlook, as well as confidence enough to chat up cutie Susanna (AnnaSophia Robb).

Faxon and Rash establish themselves as a team with a bright future. Though less assured than The Descendants (the lack of director Alexander Payne might have something to do with that), The Way, Way Back is full of crisp dialogue, well formed characters and situations that, for the most part, ring true.

As good as everyone is, this is Rockwell’s show to steal, and he’s hilariously guilty. A freewheeling mix of Bill Murray and Hawkeye Pierce, Owen unleashes a barrage of one liners and real world philosophy. As Duncan becomes more comfortable with his water fun family, a nice dichotomy is created between the d-bag father figure Trent smugly thinks he is, and the supercool one Owen easily becomes.

Some moments are a bit forced, but on the whole, this is the rare coming of age story that feels fresh. With a big heart that both adults and teens should find relatable, The Way, Way Back is the surprise gem of the summer.