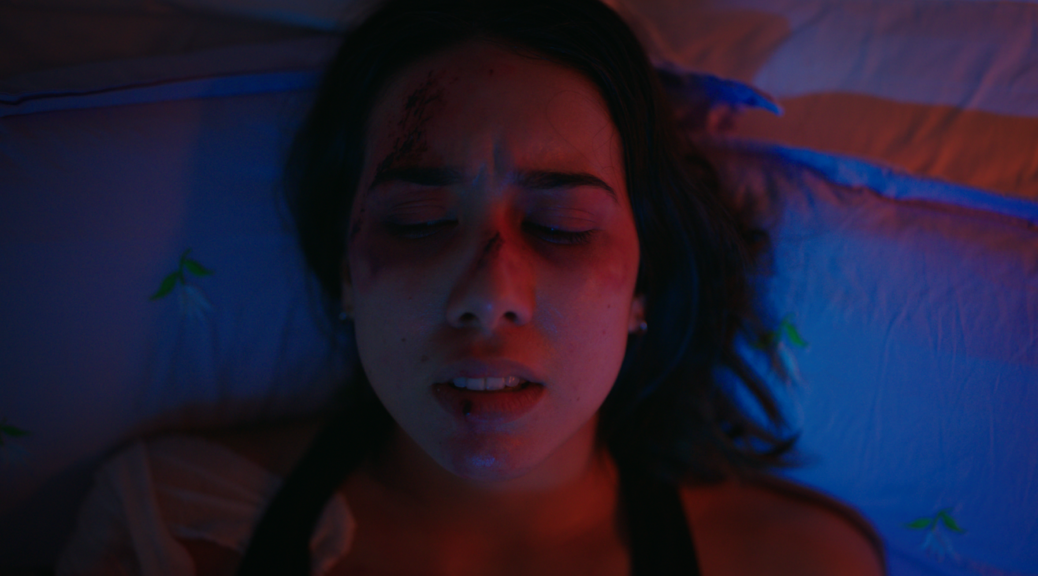 I always expect a certain level of weird when watching an Australian horror film, and writer/director Jack Dignan’s After She Died doesn’t disappoint in that regard.

When Jen’s (Liliana de la Rosa) Mom, Isabel (Vanessa Madrid), dies, it’s not very long before Dad (Paul Talbot) is introducing his new girlfriend, Florence. As if it’s not bad enough that dad’s moved on so quickly, Flo turns out to be the mirror image of Isabel.

Finding out your dad is dating your dead mom’s look-alike would be disturbing enough, but the film adds extra levels of horror: bleeding eyes, a landscape ravaged by fire, a man (possibly demon) in an animal mask. Dignan keeps you off-balance with these layers of mystery.

The problem is the level of confusion that comes with each new piece of this puzzle. It keeps you from sinking into the story. Any tension that could be built through Jen’s reaction to Dad’s disturbing choice of girlfriend is erased as more alarming images haunt the screen. Confusion can be scary, but only if done right. Otherwise, it becomes frustrating.

Thankfully, there’s little time to wonder too long about too much.

However, additional problems crop up with the introduction of too many characters and too many threads. Some characters serve little to no purpose. Storylines are introduced but unconvincingly explored. It all serves to further distract and frustrate.

Visual horror is the film’s strongest feature. The fires that burn off and on in the background add extra unease, and a few scenes send shivers down the spine. Dignan’s understated enough with gore to keep you from looking away. His approach is effective, never overboard.

Unfortunately, he can’t match imagery with an equally unsettling story. It’s clear Dignan wanted to tell a broader tale, one with far-reaching repercussions, but the elements don’t add up to a satisfying whole.

It’s disappointing because After She Died had the makings of an intriguing tale about the price to be paid when a loved one is buried in ground that’s gone sour.