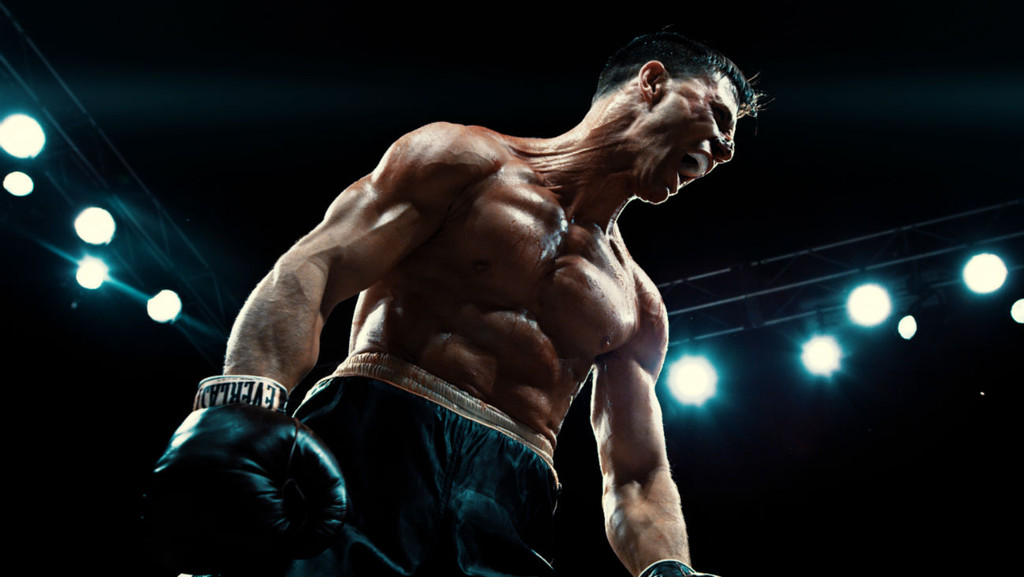 Where many filmmakers find brutality in the to-the-death mindset of contests of will and might, filmmakers Reza Ghassemi and Adam VillaSenor find beauty. Delicate, flowering beauty.

Every living thing is at the height of its natural power for a brief moment. After that, it’s just a rush toward death. In Full Bloom circles that one moment.

American Clint Sullivan (Tyler Wood) and Japanese Masahiro (Yusuke Ogasawara) are those peak specimens. Both boxers will meet in post WWII Tokyo with the world watching.

The fight means a lot of things to a lot of people. To Japan, it’s an opportunity to reclaim some pride. To the US, it reestablishes dominance. To Sullivan’s team, it’s about the money. But to the two men in the ring, the moment will simply determine which of them is in full bloom.

It’s a heavy metaphor, but Ghassemi and VillaSenor back it up with style to spare. The film is saturated with bruised masculinity, heightened emotion and existential panic. And like a lot of films of this nature, (Gavin O’Connor’s 2011 Warrior, in particular), the struggle at the core of In Full Bloom concerns animal strength versus disciplined grace.

Ghessemi and VillaSenor set things moving in the moments leading up to the fight. As Sullivan waxes brute philosophy with his sketchy manager and angling wife, the film flashes back to Masahiro’s training.

Here we leave the confines of the boxing arena in favor of gorgeous, snowy landscapes where the fighter has tracked down warrior legend Tetsuro (Hiroyuki Watanabe, bringing much needed humor to the film), hoping to learn from the master.

The filmmakers don’t introduce many new ideas here. They simply strip away any breathing room, leaving only scene upon scene of hyperbolic emotion. Their film takes on a surreal quality that’s visually lovely, often intriguing, and sometimes borderline silly.

Wood delivers a stiff performance that is nearly the film’s undoing. A posturing Eastwood type, Wood rarely generates enough depth of character to carry the symbolism and metaphor swimming around him.

As with any bout film, the fight choreography is the deal breaker. Here, taking a cue from Raging Bull and Cinderella Man, the action itself takes on a dreamy quality that supports the film’s overall themes and imagery.

It’s a solid if flawed poem, an ode to the apex predator.