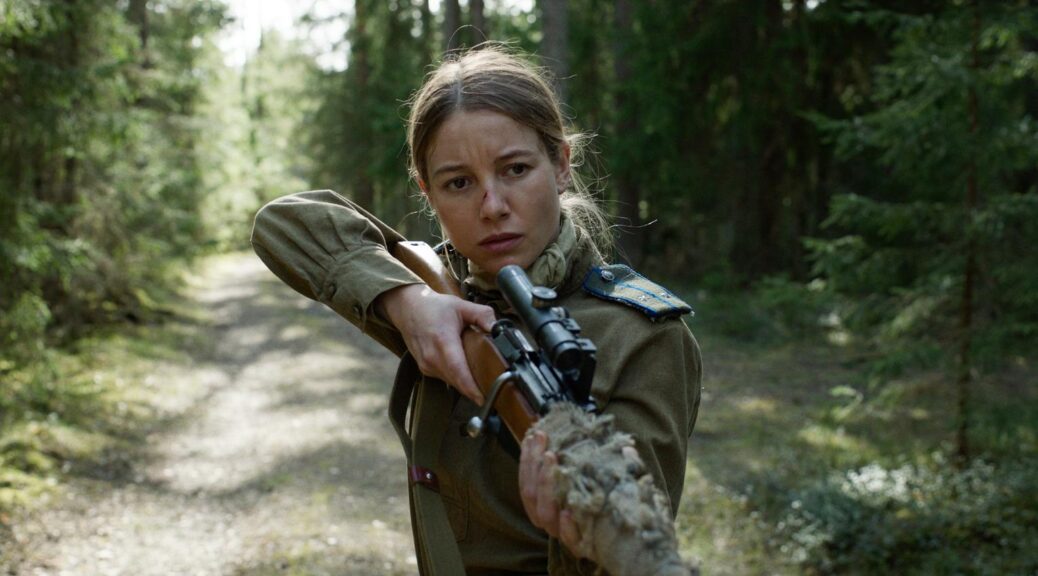 If you’re hoping that Nazi werewolves are a kind of new villain, like the Nazi zombies that have been popular for the last decade, you may be disappointed in Burial. Rather than a horror tale of the supernatural sort, writer/director Ben Parker spins a WWII thriller more interested in the cancerous effect of a cult of personality.

It’s Christmas Day, London, 1991 and Anna Marshall (Harriet Walter) is watching Mikhail Gorbachev announce his resignation as President of USSR. Suddenly, she faces a home invader. The shaven headed thug (David Alexander) has come in search of information (and probably blood and terror). He believes she can confirm his deepest, most sacred belief: Hitler did not commit suicide but survived WWII.

Why would Anna know? Because she’s really Brana Vasilyeva (Charlotte Vega), and during the war she was a Soviet intelligence officer.

Quickly, we’re whisked to the spring of 1945. Brana and a small platoon of Russians are tasked with bringing Hitler’s body directly to Stalin because “Russians like to look their enemy in the eye.” That’s all fine and good until the platoon runs afoul of the “werewolves” — Nazis trained in guerilla warfare, who were unsuccessful as soldiers but pretty effective as terrorists.

The two groups come to a head just outside a small Polish village, where local Lukasz (Tom Felton) chooses between two villainous sides, deciding to help Brana and team in a standoff.

Parker’s film is never showy or lurid in the way you might expect from a movie carting Hitler’s carcass around. It’s an understated effort more interested in kicking around how toxic hateful leaders can be once they strike a chord with like-minded populations willing—eager, even—to dominate and victimize to prove how special they are.

Brana wants less to show Stalin the corpse than to end Hitler’s legacy. Given her holiday guest, that didn’t work.

There’s a lovely mixture of melancholy and fire that inform both Walter and Vega’s performances. Barry Ward, playing Russian soldier Tor, adds depth to the group but all performances are solid.

The language — English throughout with random bits of Russian, German and Polish — pulls you out of the cinematic fantasy. But Parker’s spare use of violence ensures that it makes an impression when it does show up.

The story frame works less well. Plus, I wanted real werewolves. But still, Burial is an effective piece of historical fiction.