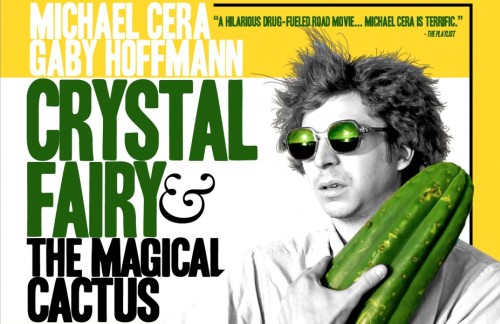 One of this summer’s brightest surprises comes by way of Michael Cera’s drug-fueled road trip picture Crystal Fairy & The Magical Cactus.  Loosely scripted and casually filmed, the flick follows the journey of a group of youngsters in search of some mind expansion in Chile. What evolves is a quietly, subversively brilliant character study.

Cera plays Jamie, a displaced American anxious for the experiences available in drug use. He’s insecure, adopts a handful of pseudo-hippie-isms, and looks to really experience life through mind alteration. He meets his match in Crystal Fairy – a modern day freak Jamie invites on the trip.

Crystal Fairy is played by a positively fearless Gaby Hoffman. “Fearless” being the film critic vernacular for “willing to do full frontal.” There is a true fearlessness in that act, particularly if the shocking display of vulnerability it is used properly, as it so definitely is in this work.

Road trips offer such undiluted community experiences that we all want to mock, smack, maybe even abandon one or two co-travelers every now and then. At least that’s the memory I have of Madden family trips.

Regardless, writer/director Sebastian Silva plumbs the situation for touching, comic, and strangely familiar moments. Those who saw his magnificently naturalistic The Maid will recognize the filmmaker’s contagious fascination with common moments. Silva’s screenplay – handled with grace and humanity by the ensemble – never stoops to easy jokes, although the entire picture beams with humor. Characters develop multiple dimensions, and the mostly improvised conversations take charmingly human paths.

The portrayal is deceptively well structured, though. It may feel for all the world like one profoundly uncomfortable journey meandering for a couple of hours, showcasing two pushy Americans who embarrass themselves in front of three lovely Chilean brothers. But Silva has a more satisfying and definite aim than that.

You should give it a try.

I mean the movie, not the mescaline.