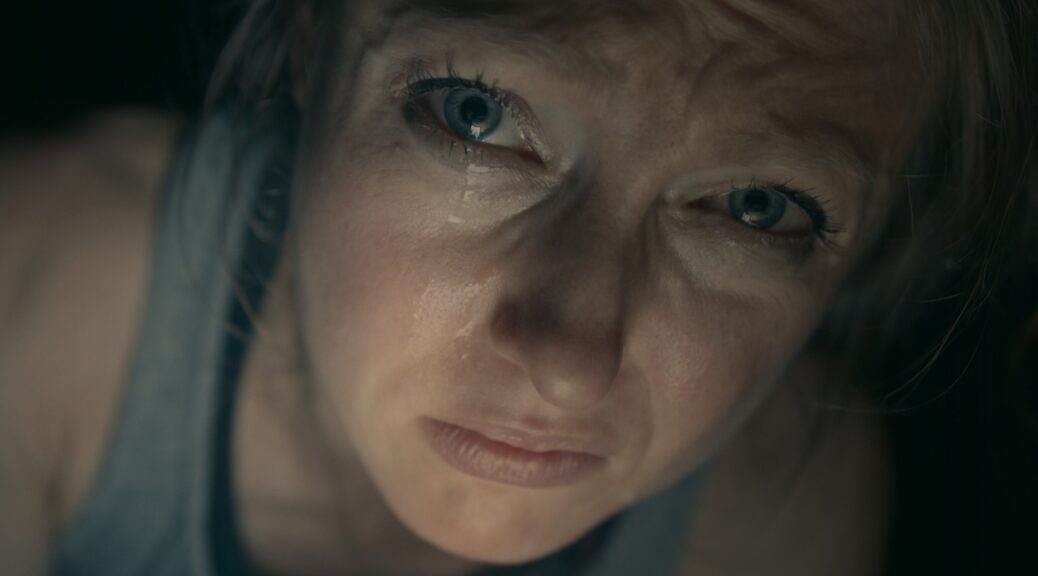 Co-writer/co-director Bennett also stars as Charlie, a woman eagerly waiting for her lover Simone (Emma Myles) to return from a trip. It’s their first anniversary and Charlie would like it to be special.

What transpires never has two people in the same room, is set almost exclusively in one apartment, utilizes multiple device screens, and somehow pulls it off as not a Covid necessity but an effective way to create tension.

As Simone is later and later, Charlie finds herself stuck in the apartment. Literally stuck – the door is jammed. And though she’s able to raise her mother (Barbara Crampton) and her best friend (Dora Madison), neither will really follow the conversation and help her out.

Bizarre noises, missing objects, and creepy goings on all build a potent sense of foreboding. The allure of the film is this tension and the way Brooks and Bennett weave in surreal flourishes to give the piece a macabre quality.

But the reason it works as well as it does is because Alone with You becomes a cagey allegory. The film taps the horror of unhealthy relationships, but it also works that nerve of being trapped in the damn house—as we all have been.

In much the same way Sean King O’Grady’s We Need to Do Something picked that Covid scab with a family stuck in a bathroom together, Alone with You recalls the almost desperate desire to get out.

Each actor on screen does a credible job of interacting with tech. This can be a tough sell, but Bennett and the small cast all make it work. Crampton is a particular joy as Charlie’s judgy mom. She veers from nitpicky to loving to critical to nightmarish in the span of a single, beautifully crafted scene.

Even at a slight 83 minutes, though, Alone with You feels a little bloated. But the mystery at work binds with a horrifying sense of familiarity to manufacture enough scares to keep you guessing. 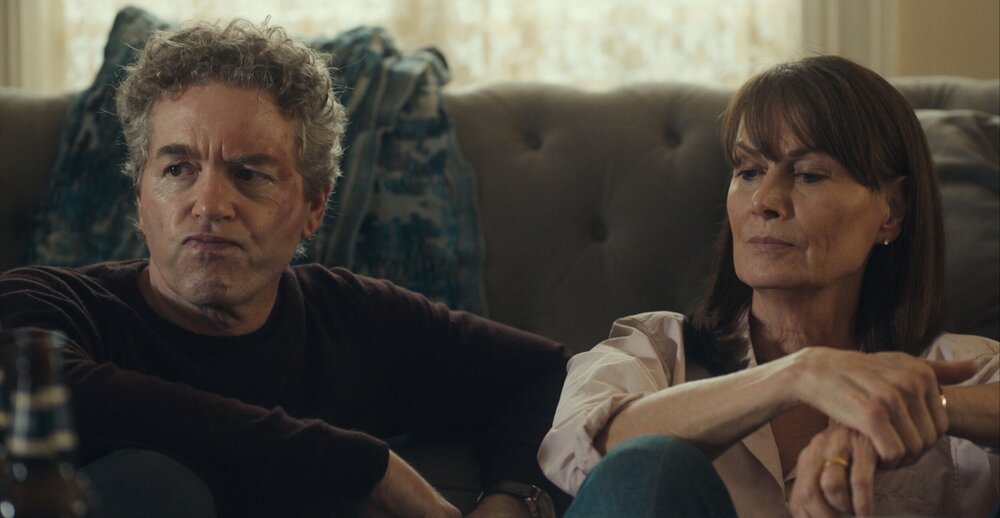 I think most modern movie-goers would agree that the last thing they want to see is another movie detailing the mid-life crisis of a rich New Yorker. It’s hard to muster even the most sarcastic crocodile tears while watching a sad advertising executive drive his sports car through Manhattan. Cynicism aside, King of Knives might appear to be the king of cliches at first glance, but this is a film that has a few tricks up its sleeve.

Aforementioned Frank (Gene Pope) is our through-line into a family that, on the surface, looks to be typical, albeit with a few rough edges. The light banter that permeates through a celebratory anniversary dinner early on is quickly smothered as a hint of tragedy manifests itself. As the fractures in Frank and his wife Kathy’s (Mel Harris) marriage begin to show, their daughters (Roxi Pope and Emily Bennett) struggle with their own wants and relationships.

King Of Knives toys with our expectations from the get-go. There’s a whimsical edge that engulfs the early scenes – a tone that doesn’t feel too far off from a winky Julia Roberts movie of the 90s. The tone begins an interesting transition when family tragedy, infidelity, and mental illness enter the fray. It’s in this transition that King of Knives shows its hand.

Brutal honesty gives King of Knives its power. This isn’t a movie looking for an easy happy ending. Instead, the characters are going through the painful process of finding what truly makes them happy. For Frank, it’s finally owning up to what a terrible father and husband he’s been. It’s not about Frank searching for pity, or the film doing so on Frank’s behalf. Instead, it’s about seeing a character confront the choices that caused so much pain for the people he loves.

It’s not all blue Mondays, though. King of Knives is genuinely funny. The cast has a natural chemistry that allows them to bounce off one another. The comedy isn’t about bits being paid off but instead comes through its characters.

First-time feature director Jon Delgado might not have the sharpest visual eye, but he also knows that this material isn’t looking for a flashy approach. Delgado lets the story and performances shine without letting his more technically-focused experience get in the way.

King of Knives isn’t going to change your mind about rich New Yorkers, but you might approach the fictional kind with a little more empathy next time.