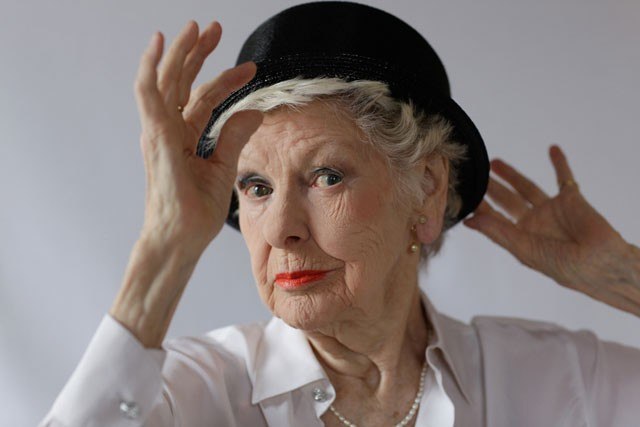 Having stolen scenes on stage and screen (large and small) for 60+ years, it’s only appropriate that Elaine Stritch would get the chance to hold your attention all on her own in the new documentary Elaine Stritch: Shoot Me. And for 80 brief minutes, she commands attention and more in a film that attempts to match the old school, ballsy dame’s single most compelling quality: unflinching honesty.

For the uninitiated, Stritch may be best remembered as Jack Donaghy’s irascible mother on 30 Rock – a performance that won Stritch her third Emmy. (She was nominated 5 times for that role alone.) But Stritch is a legend of the stage, and a personality that’s too big to hold in any medium.

Lensed by first time director (longtime producer) Chieme Karasawa, Shoot Me serves the formidable octogenarian well by simply presenting her as she is: brassy, vulnerable and pantsless.

We spend some time with the headstrong entertainer leading up to her 87th birthday and her newest project, the cabaret act Singin’ Sondheim…One Song at a Time. It’s an opportunity to glimpse her whirlwind past as well as her struggles with alcohol and diabetes, not that she’d accept your pity.

As the seasoned pro says, “Everybody’s got a sack of rocks.”

It’s Stritch’s paradoxical qualities that make her so engaging. She’s a prima donna without an ounce of pretense. She’s humble and candid and absolutely addicted to attention. Says her longtime friend Julie Keyes, “She is a molotov cocktail of madness, sanity and genius.”

Karasawa and her film are appropriately in awe of this truly remarkable talent, but she’s also wisely clear-eyed in her efforts. The film lacks any hint of nostalgia or romanticism – the kind of gimmicks you might find in other biographical docs. It’s a bit more like the 2010 film Joan Rivers: A Piece of Work in that it marvels at the star’s seemingly boundless energy and phenomenal work ethic without clouding the image of a flawed but fascinating cultural icon.

One element that sets Stritch apart from other performers of her generation or any other is her immediate and amazing connection to the audience. Perhaps that’s why her story and personality prove such compelling fodder for a documentary.