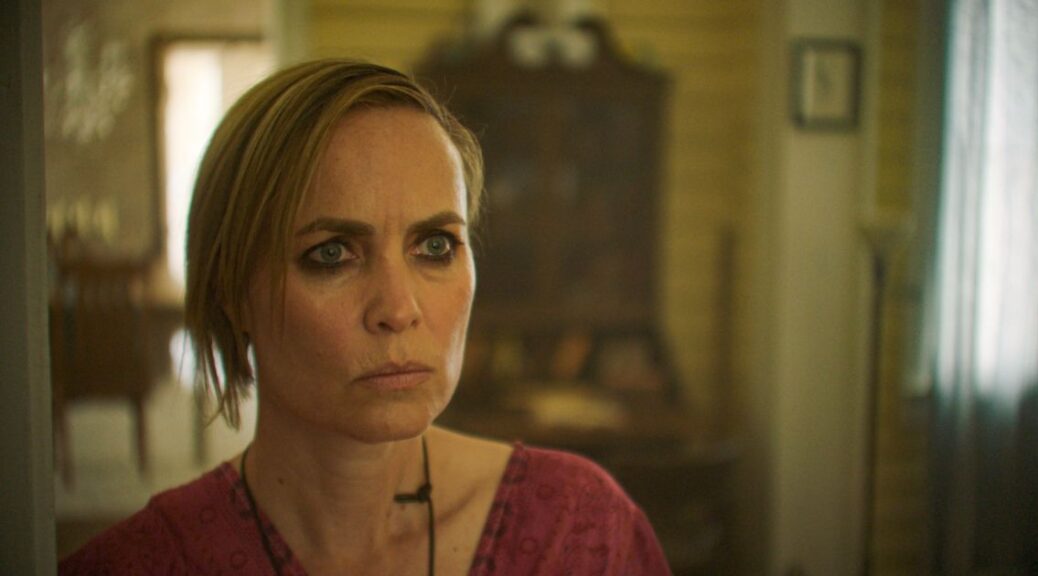 I hate to admit this, but my first thought upon screening Devil’s Workshop was that we don’t need another low budget exorcism movie – or worse yet, another ghost hunter demonologist movie. I am pleased to report that writer/director Chris von Hoffmann’s latest horror offering is not “just another” anything.

The premise seems garden variety enough. Struggling actor Clayton (Timothy Granaderos, Who Invited Them) auditions for the part of a demonologist in a new low-budget indie. His competition, Donald (Emile Hirsch), is a social climbing douche who gets whatever he wants. To sharpen his edge for the callback, Clayton hires a real demonologist to train him for the performance.

That demonologist is played by Radha Mitchell, who’s both wonderful and evidence that von Hoffman has something unusual up his sleeve.

The filmmaker cuts between earnest, insecure Clayton undertaking his eerily authentic preparation, and narcissist Donald, preparing in his own way. As von Hoffman does this, he comments on the main theme of his film: a knowing, sly analogy of the process of acting, from ridiculous to pretentious to dangerous.

What emerges is a cheeky, cynical but not hateful application of the mantras and exercises meant to break an actor down and open them up to the demons that will create a better performance.

The acting is stellar, beginning with Mitchell. Her giggles and offhanded terms of endearment, hand gestures and facial expressions create an elusive character. Granaderos, so impressive as the sinister partygoer in Who Invited Them, adopts a wide-eyed insecurity that suits von Hoffman’s style.

Rather than drawing our eye to the speaker, von Hoffman’s camera lingers on the listener. The choice captures Clayton’s discomfort, sometimes for a troubling length of time, creating unease.

The horror does well enough for nearly long enough. A couple of times it’s effective, but it never rises to true scares. Worse still, the payoff doesn’t land. In the end, von Hoffman’s insiders-view of the dangers in submitting entirely to a part falls just short of success.