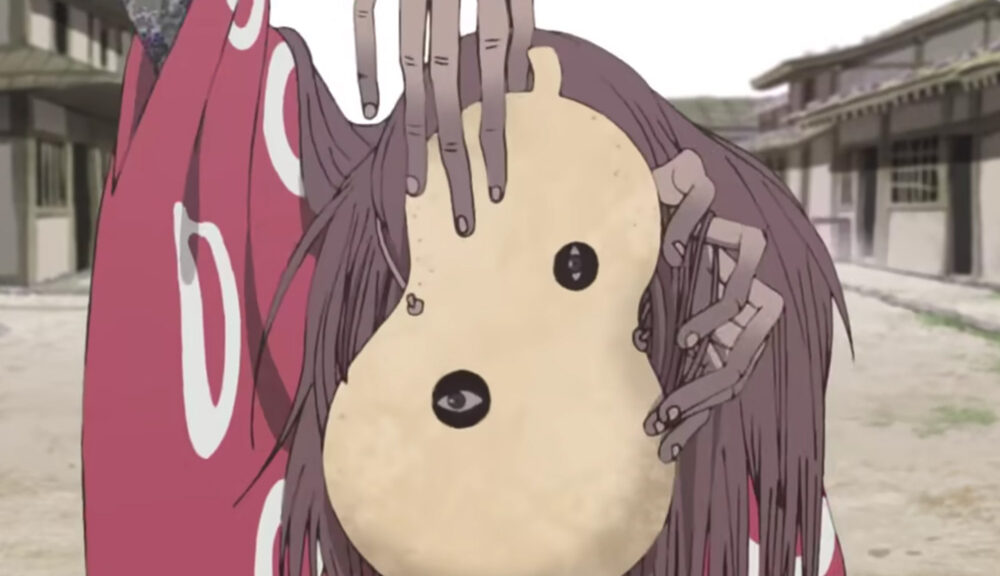 Inu-Oh is one of those movies where the less you know going in, the more of a delight it becomes as the story unfolds. Stop right now, go see the movie and you won’t be disappointed.

To call director Masaaki Yuasa’s take on feudal Japan a Noh rock opera undersells the delirious places the movie goes, even for Yuasa (although if you watched his Devilman Crybaby on Netflix, you know what you’re in for). What starts with a ghost story and a brief history of the birth of Noh in 14th century Japan becomes a rollicking, righteous homage to the likes of Queen and Bowie.

The animation is as fluid and rhythmic as the music, and Inu-Oh is always beautiful to look at. But the music is where the film soars—along with its almost relentlessly on-message theme. The story focuses on the friendship between Tomona (Mirai Moriyama), a blind biwa player looking to avenge his father, and Inu-oh (Avu-chan), a demonic child who can only exorcise his curse through storytelling.

But these aren’t just any stories. Tomona and Inu-oh form a band and start staging modern rock performances that inspire crowds but anger the shogun and the more traditional troupes that will become the highly regimented Noh.

For Tomona, there is a creative imperative to be yourself and decide who that is, even under threat of execution. And for Inu-oh, their new form of expression is even more essential. As he tells these forgotten stories of dead Heike warriors, he slowly becomes more and more human.

The message isn’t subtle, and just in case, it’s spelled out explicitly by Tomona and Inu-oh. The songs are a way to honor memories. If our stories are forgotten, what do we have left?

Still, it’s hard to argue. And harder still to resist when delivered in the form of Yuasa’s brilliantly conceived stage performances that blend traditional, modern and downright trippy into something wholly new. It’s about as joyful a movie as you’re likely to get for a feudal ghost story about curses and family tragedy. It’s also a movie that manages to be both epic and immediate. History for Inu-oh is alive. And art needs to be as well if it’s going to have any lasting relevance for an audience