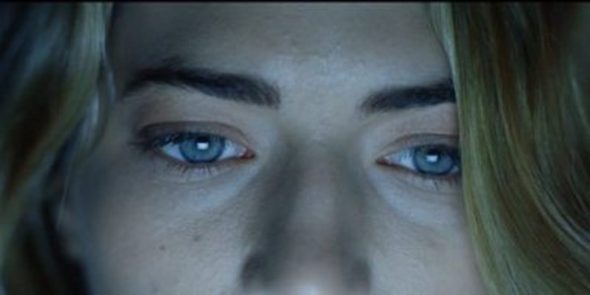 I mean, somebody must love them or who is it they influence? But horror definitely does not love them. Influencers have become the go-to objects of horror in recent years, seen as the vacuous product of a narcissistic culture that doesn’t value—or even make—human connections.

Meet Mia (Daisye Tutor). The rising makeup influencer has way more followers than her two besties and her boyfriend, so they’re unhappy when she pulls out of their livestream event this Saturday to dog sit for her sister.

But being selfless is totally on brand for Mia, and another makeup influencer just died trying to protect her own dog from a canine killer. Is it guilt? Is it opportunism?

Neither. It’s a setup for the premise of Shook. Mia is home alone with Chico (the dog, who’s awfully cute). But she’s never unplugged and soon someone is playing life or death games with her.

Writer/director Jennifer Harrington’s film really begins with a plot as old as the genre. It could be the babysitter and the escaped lunatic, the point is to have a vulnerable (and acceptably stupid) young woman alone, trying to protect those in her charge from an unseen and menacing force.

So, it doesn’t start out fresh, but movies have made a go of this plot. Harrington layers in newer cliches derived from our collective, plugged-in anxieties. The result is When a Stranger Calls meets Scream meets Unfriended.

It feels exactly that derivative, a fact that doesn’t entirely sink the film. It definitely never lives up to its opening, though.

Harrington makes her most incisive comment about the performance art that is influence culture as she pans back from a glamorous, opening red carpet photo shoot to show the bleaker reality of the staged event. It’s a smart, cinematic revelation that works on two levels.

Thematically, it underscores the film’s point about the artifice of Mia’s life. As a horror movie, we’re suddenly aware that someone is watching – someone who sees all of it.