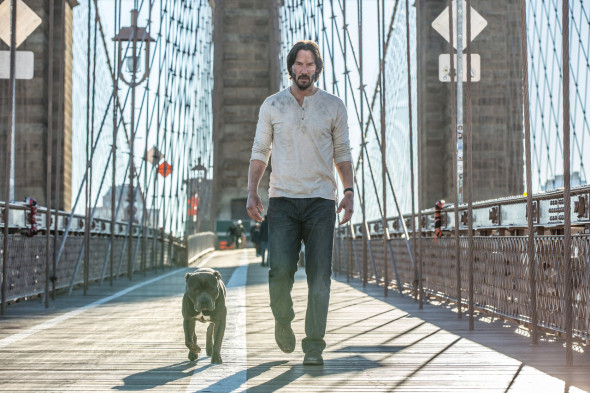 But every once in a while he lands on a role where acting like an actual human just doesn’t matter – like the surprise 2014 hit John Wick. If you enjoyed that splashy bit of violence and canine love, you’re likely to appreciate its strangely anticipated sequel, John Wick: Chapter 2.

The Keyser Soze of international hitmen, Wick was brought out of retirement, you’ll remember, when a half-assed Russian mobster stole his dog and his car. And if you could make it through the maudlin, sentimental crap and focus just on that kickass hotel shit, it was a mildly entertaining film despite Reeves’s absence of talent.

Once out of retirement, though, Wick has a tough time getting back out of the biz.

Chapter 2 picks up right where the previous installment ended. Wick, his beloved if unnamed pit by his side, re-buries the gold coins and weapons of his trade. But Santino D’Antonio (Riccardo Scamarcio) requires Wick’s services – and he’s not above doing ill-advised things to acquire his compliance.

Director Chad Stahelski and writer Derek Kolstad return, both improving on their previous effort by streamlining the story, limiting sentimentality and spending more time exploring what was cool the first time – The Continental.

Turns out there’s a mirror hotel in Rome, site of Wick’s new gig. There’s also a high-powered organization of the world’s most influential criminals as well as an armed, underground network masquerading as New York’s homeless.

Basically, 4 out of every 5 people walking the street are trained killers. Who’s paying for all this?

Stahelski ups his game with the action sequences. Wick’s movements are without ego – they are clean and efficient, which is appropriate. And he likes to shoot the knees out, so points for that. Stahelski films with flair – fascinating framing, often beautifully backlit. It’s fun.

Still, there’s the problem of Reeves’s acting. (I’m sure he’s a very nice man.) Stahelski does what he can by pairing his lead with slightly more agile actors to buoy the few scenes with dialog. The always-welcome Ian McShane returns. Peter Serafinowicz and Franco Nero make tangy appearances, along with one co-star who would have been a fun surprise had his face not been splashed all over the trailer.

Sure, there are problems – besides the dialog. Why are the bad guys all such bad shots? Where are all the witnesses? Eye-rolling contrivance follows ludicrous convenience, but these guys brought their shootin’ boots.

It’s not like you don’t know what you’re in for here.