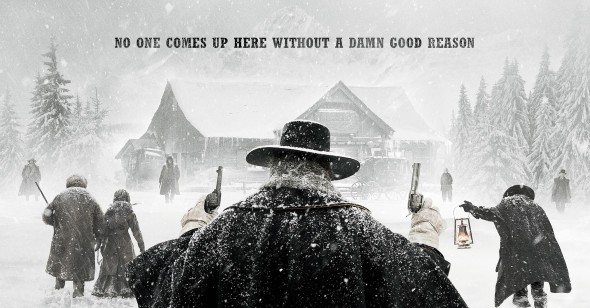 Perhaps you haven’t noticed, but 2015 may have been the year of the Western. The brilliant, underseen films Slow West and Bone Tomahawk kicked things off, with the amazing The Revenant just around the corner. But it’s the latest from Quentin Tarantino that solidifies the theme, and something tells me The Hateful Eight won’t be counted in the underseen category.

Though not exactly the soul mate of his 2012 near-masterpiece Django Unchained, H8 is certainly a Civil War-era shooting cousin. Set just after the War Between the States, Tarantino’s latest drops us in a Wyoming blizzard that sees an assortment of sketchy characters hole up inside Minnie’s Haberdashery to wait out the storm.

Throwback stylings, wicked humor, a deliberate pace, and thirst quenching frontier justice mark Tarantino’s eighth picture – a film that intentionally recalls not only the more bombastic Westerns of bygone cinema, but many of QT’s own remarkable films.

Kurt Russell (sporting the same facial hair he wore in Bone Tomahawk) is a bounty hunter escorting the murderous Daisy Domergue (Jennifer Jason Leigh) to hang, but they won’t make that last stage to Red Rock because of this blizzard. Hell, they may never make it to Red Rock at all.

With the genuinely gorgeous wide shots of a blizzard chasing a stage coach through a vast Wyoming countryside, all set to Ennio Morricone’s loudly retro score, H8 opens as a true Western, but it soon settles into something closer to an Agatha Christie-style whodunit. Although I’m not sure Christie ever got quite so bloody.

Minnie’s Haberdashery is populated by a lot of familiar faces. Sam Jackson, who’s never better than when he’s grinning through QT’s dialog, excels in a role that keeps the era’s racial tensions on display. Meanwhile, Mr. Orange Tim Roth does his finest Christoph Waltz impression.

Walton Goggins is especially strong as Rebel renegade Irskin Mannix’s youngest son Chris, but it’s Leigh who steals the film. She’s a hoot in a very physical performance unlike anything she’s delivered in her 30 years in film.

Most of Tarantino’s career has been about re-imagining the films that have come before. With The Hateful Eight, he spends a lot of time rethinking his own work. Much of the film plays like an extended version of the “Stuck in the Middle with You” scene from Reservoir Dogs, reconceived as a bounty hunters’ picnic.

As is often the case, QT breaks cinematic rules left and right. Sometimes these risks pay off, sometimes they don’t, but even at 3+ hours, the film never gives you the chance to get too comfortable.

This is not Tarantino’s most ambitious film and not his most successful, artistically, but it is a riotous and bloody good time.