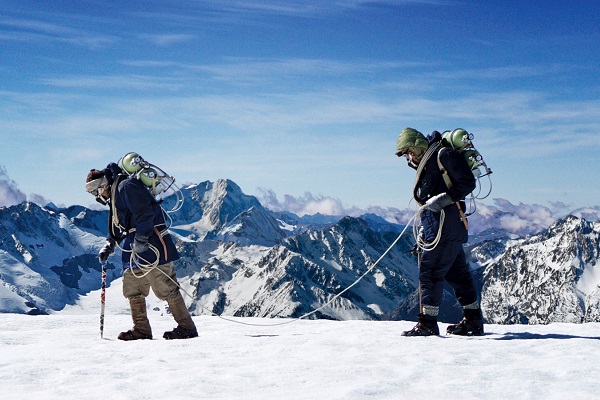 There’s a good chance you already know Sir Edmund Hillary was one of the first two men to reach the top of Mt. Everest. You may also know the other man was Sherpa Tenzing Norgay. Maybe you’ve seen Hillary’s famous photo of Norgay at the very top of the world.

Even after all these years, there’s more to their story, and the new documentary Beyond the Edge provides plenty of thrilling reasons to revisit the adventure.

No doubt, one of those reasons is 3D technology. Let’s be honest, if you’re looking for an excuse to play with the extra dimension, footage of Mt. Everest is a pretty damn good one.

Writer/director Leanne Pooley mixes deft reenactments with stirring archival footage and audio interviews, effectively pulling us into the launch of John Hunt’s Everest expedition in the spring of 1953.

The thirty three year old Hillary, a beekeeper and avid climber from New Zealand, was part of Hunt’s team, as was Norgay, an experienced and respected Nepalese mountaineer. Pooley lays the basic facts out clearly, and then slowly builds the drama as fate conspires to give the two men the chance to make history.

I’ve been fascinated by Mt. Everest for years and I’ve read many books on its climbing history, and the film still provided a fresh perspective.  The 3D perspective is indeed a treat, but it’s the human drama of Beyond the Edge that still inspires.