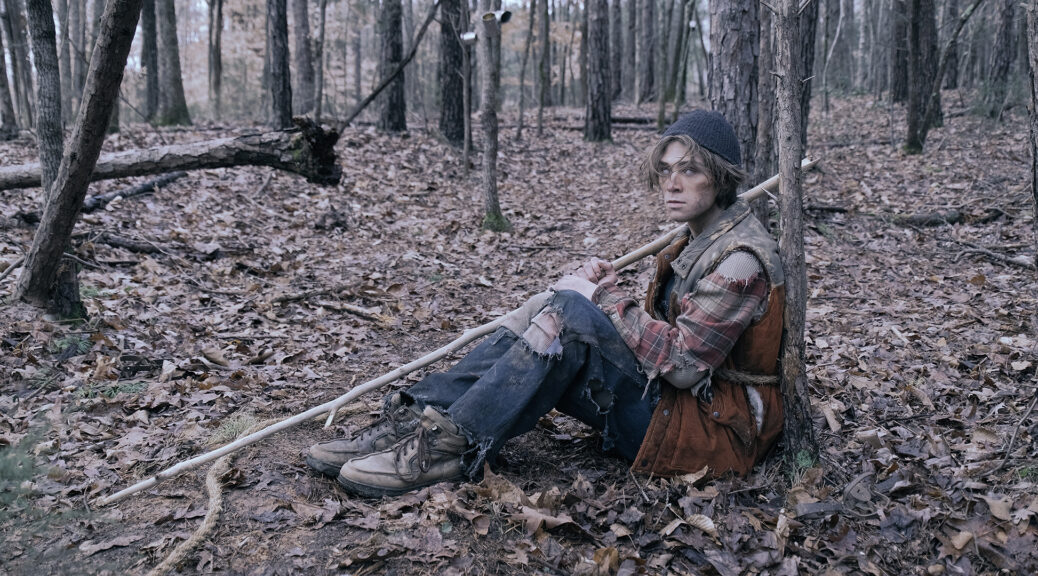 Another “beware the beast in the woods” tale, Tethered (the first feature film for director/co-writer Daniel Robinette, expanding his short from 2017) attempts to make its mark on the genre utilizing a unique leading man- a blind, recluse teenager.

Abandoned by his mother (Alexandra Paul) at an early age, Solomon (Jared Laufree) makes due in his secluded wooded home before befriending a lost hunter (Kareem Ferguson). Solomon lives by the rules his mother left before her unceremonious departure, the most important of which being: always keep a hold of the rope.

Connected to the home, Solomon ties the titular rope to his waist any time he ventures outside of its walls- partially for guidance due to his blindness, and primarily to keep away from the monster lurking in the forest.

The directing is competent and the film well shot, creating an aesthetically pleasing piece. The dull gray scale that has become all too common with modern horror is present but not suffocating, playing well into the earthy tone. The visual aesthetic created through production design and costuming is perhaps the strongest aspect of the film- the ever-present feeling of unease is visually palpable.

From top to bottom, the piece is plagued by uneven acting performances. The characters feel awkward and confusing, lacking in any interesting development.  Whether these character issues are caused by stilted performances or an unbalanced script is hard to say, but can most likely be chalked up to a bit of column A, a bit of column B.

A blind teenager tethered to his home is an inherently interesting idea, but not interesting enough to carry the entirety of a film. Tethered seems to rely on novelty instead of investing in uniqueness. The themes it leans into- generational trauma, loneliness, parental abuse- are lightly grazed. The opportunities director Daniel Robinette had to explore these themes and transform this piece to a level similar to The VVitch or Hereditary seem visualized, but unfulfilled.

Much of the film is spent indulging in the visuals- which, again, is the strongest aspect. But paired with the slow, staggered pacing and the lack of character development, one can’t help but wonder if the film’s 88 minutes could have been used more wisely.

In the case of Tethered, sometimes the beast in the woods can become your own unfulfilled ambition.