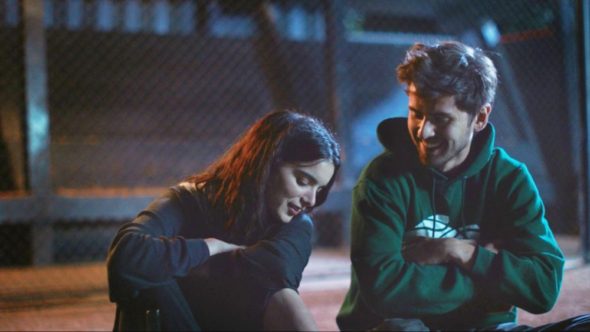 It takes a certain bravery to cast yourself as a leading man who spends more time talking to his mom and stuffed dog than the romantic object of his affection. But Shithouse, the loosely autobiographical festival favorite from writer/director Cooper Raiff, isn’t the typical college comedy.

It starts in familiar enough territory. Raiff plays Alex, an awkward college freshman who feels like a fish out of water in Los Angeles and is homesick for his family back in Texas. It’s not clear that Alex has really talked to anyone besides his roommate, until a chance encounter brings him together with Maggie (Dylan Gelula), his dorm RA.

There’s an oblique chemistry between Alex and Maggie, a connection that’s undeniably there but blossoms as erratically as their first peripatetic night together wandering campus. So much of the movie starts to take on this collegiate version of Before Sunrise that it’s all the more disarming when their relationship takes a turn.

It’s also where Raiff’s script takes Shithouse from standard coming-of-age fare to something far more moving and empathetic. And refreshing: the writing is sensitive to its characters without flattering them. Young people behave terribly, but there’s a measure of grace the film affords them that feels welcome to anyone willing to put in the work to be a better person in a very public social media era.

For Alex, that means interrogating what it means to be a so-called nice guy. But it’s Gelula who steals the movie. Maggie has a mix of confidence and world-weariness that almost excuses Alex for being so enchanted. But she’s just as quick to dispel anyone’s entitlement, Alex included.

What Raiff captures so well, both in the quiet moments between Alex and Maggie but especially in the spaces where the two are apart, is all the hope and anxiety bound up in relationships—and how much possibility they can contain if you open yourself up to it.