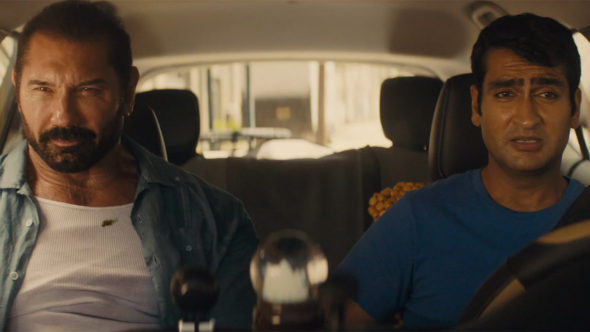 Dave Bautista and Kumail Nanjiani actually have more in common than you might think. Both are charming, funny, likable oddballs and both are outstanding on Twitter.

That last bit is less meaningful as they team up in the bromance romp Stuber.

Bautista plays Vic, a weirdly muscular LA cop. Nanjiani’s Stu is an Uber driver. Vic has eye surgery the same day he gets a tip on a big drug deal going down. Unable to drive, he presses his Uber driver into involuntary service.

The main problem with this movie is that it’s idiotic.

A handful of other actors, including Natalie Morales and Mira Sorvino, sleepwalk through the most rote buddy cop movie you’ve ever seen basically to create a backdrop for Nanjiani to make being the voice of reason sound so funny.

He’s basically playing Kumail Nanjiani, which is, of course, the role he was born to play.

Bautista has a tougher row to hoe. He can’t sell the physical comedy, which is the point of his giant, bumbling, near-blind-and-yet-still-driving-and-shooting-weapons character.

Dude, that should be comedy gold, especially in the hands of director Michael Dowse, whose classic hockey comedy Goon understood the charm of the blundering, violent dumbass.

Writer Tripper Clancy (that’s a name!) doesn’t help, as the only interesting ideas he has—the one he’s hung his entire screenplay on—he stole outright from Deadpool.

Hey! You know what was funny? Deadpool.

It’s too bad because both Nanjiani and Bautista deserve a lot better than this low-aiming and forgettable mess.