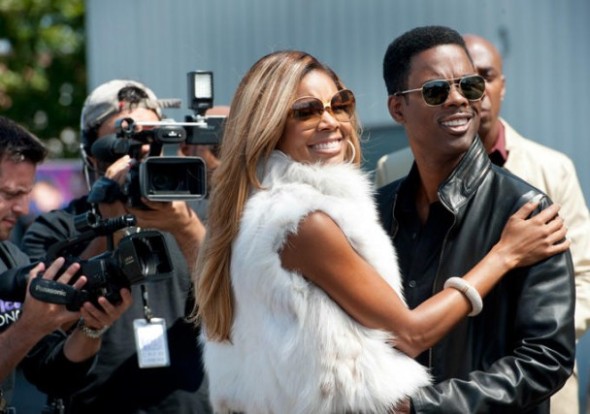 Just a few minutes of Chris Rock’s standup act will tell you he’s one of the funniest people alive. Read one of his interviews and you’ll see he’s also smart and thoughtful. His work on the big screen has delivered uneven results, but with Top Five, his talent and his vision are finally in perfect sync.

It’s Rock’s third feature as writer/director/star, and he finds gold in the old adage “write what you know.”

Stand-up veteran Andre Allen (Rock) has left the clubs behind for success in Hollywood, thanks mainly to the “Hammy the Bear” franchise where he stars as a wisecracking, crime-fighting Grizzly (catch phrase: “it’s Hammy time!”) But Andre has come to a crossroads, in both work and life.

He wants to be taken seriously as an artist, but his new film about a Haitian slave uprising is having trouble finding an audience. Meanwhile, he’s engaged to a reality TV star (Gabrielle Union) who feels anything out of camera range doesn’t matter.

So Andre is in no mood for an interview with the New York Times, a paper that has a long history of trashing his work. Ambitious reporter Chelsea Brown (Rosario Dawson) softens his stance, and their interaction grounds an insightful look into what’s on Chris Rock’s mind.

It’s a lot: celebrity culture, race relations, sobriety, fame, love, sex, even Angry Birds are in Rock’s crosshairs, as he riffs from one topic to the next and back, not unlike a tightly packed monologue. Rock shows much growth as a director, and his confident, often out-of-sequence approach not only keeps the pace feeling brisk, but it makes sure the cheesy sequences (and there are a couple) don’t get the time to take root.

Chris Rock the actor still suffers some unsteady moments but has never been more appealing. Dawson helps. She has the talent to lead without upstaging, and they create a comfortably sweet rapport.

Even before Adam Sandler show up as himself, you’re reminded that this might be what he and Judd Apatow wanted Funny People to be, until that film dissolved into a self-indulgent overreach.

Top Five is obviously a very personal statement, but it’s also got the heart, and the smarts, to become universal.

Funny and entertaining? That doesn’t hurt, either.