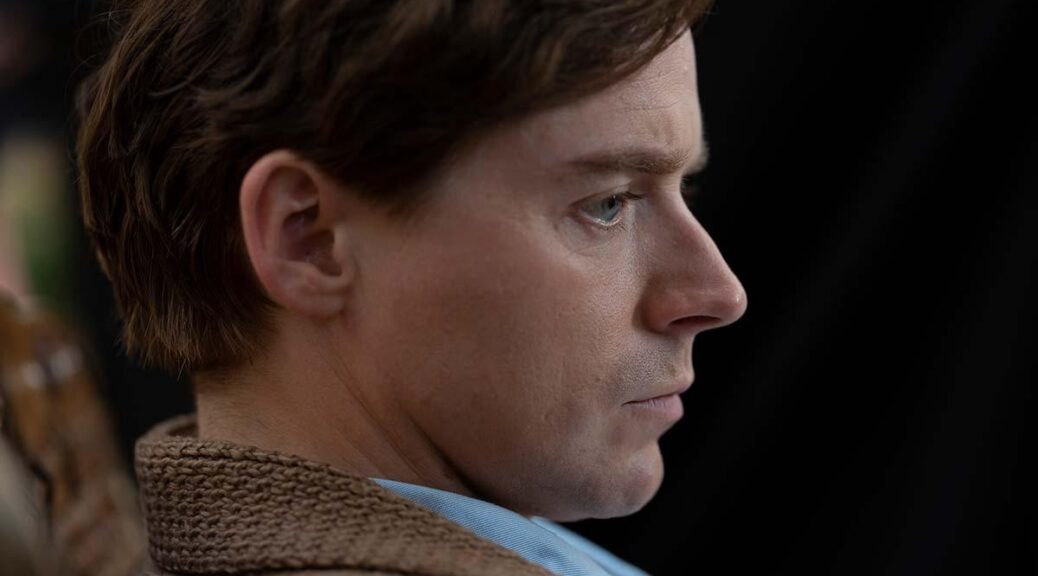 And the poetry is really the star of the show.

This isn’t to say that Sassoon’s life is boring and without conflict. Not at all. As a lieutenant fighting in France, Sassoon was horrified by trench warfare, and the tone of his poetry shifted from romantic and patriotic to a gritty depiction of rotting corpses, suicide, and a growing sense of futility amidst the mud and gas attacks.

He was awarded the Military Cross for “conspicuous gallantry” and then wrote a letter to his commanding officer (forwarded to the press and House of Commons) refusing to return to active service, condemning the motives of an unjust war. Instead of being shot for treason, he was sent to a Scottish war hospital to recover from “shell shock.”

After the war, he had several love affairs with men (writers, actors, and aristocrats). He married a woman, had a son, converted to Catholicism and was appointed Commander of the Order of the British Empire.

Writer/Director Davies doesn’t give the story of Sassoon a clear focus/narrative arc. It bounces back and forth in time, setting the few jewel-like moments in which the poems are performed among a series of vignettes from the author’s life. In these, he searches for authenticity and connection in a fractured world. Sometimes we wander about through tasteful interiors while people in sumptuous clothing shout about relationships that aren’t completely explained. Occasionally this is intercut with archival footage from WWI.

This experimentation in form and use of stream-of-consciousness is a technique employed by literature in the period after the Great War. It allows us to experience Sassoon’s longing and disappointment as he tries to find meaning and salvation in political action, relationships, family, and religious devotion—all of which fail him.

Both the actors playing Sassoon, Jack Lowden (young) and Peter Capaldi (old), give heroic, emotionally vulnerable performances. My only real criticism here is that there isn’t enough of a throughline connecting Lowden’s open-hearted optimism (even post-war and post-breakup) to Capaldi’s cantankerous hatred of all things modern.

Lowden does such a good job of keeping Sassoon’s emotional self locked behind a façade of genteel wit and English manners that, in the scenes from his later life depicted by Capaldi, the Sassoons seem like two completely different people.

Still, the fragmented structure of the film and the character does a superb job of depicting the trauma sustained by a generation who experienced the unprecedented horrors of what was supposed to be the War to End All Wars.